I wrote a series of blogs looking at four people with the Stanley name that ended up in Massachusetts. There are grounds for suspecting that they might be related to me. They hail from the same part of Roscommon as my grandfather – only two or three miles away. They share the Stanley name. But I know that there are others that meet these criteria with whom I have no biological connection. I remain hopeful that by presenting the evidence it will be possible to either include or exclude them from further analysis.

This time I am looking at a mirror image problem. I want to take another look at people with whom I know there is a connection, but I don’t know what it might be.

I share relatively small amounts (34 cM) of DNA with two people who live in Missouri. They are closely related. I believe that the person on which I need to focus is Sue Alice McHugh.

From experience of finding other common relatives when there is only about 35cM of shared DNA, I think that I need to go back to the mid-late 1700s.

Sue was born in Foley, Missouri in 1896. Foley is about a mile from the Mississippi. Sometimes it is part of the River, as the photo from 2019 shows. 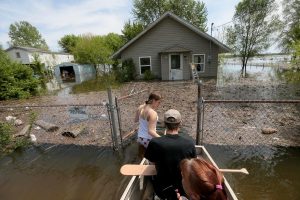 She married Bower Douglas Waggoner in August 1916. She seems to have had a long and happy life. There were many grandchildren and great grandchildren. She died in 1986.

There is a possibility that I should be looking at her husband’s side. My research indicates that the Waggoner family were in America from the late 1600s. This fact alone appears to exclude this line from my analysis.

In amongst the many descendants of Sue McHugh and Bower Waggoner are a number of genealogists. Some of these have published their family trees on Ancestry. However, I hit a problem when I looked at the various trees in detail. Far from presenting a coherent narrative, significant differences emerge as one travels back in time. My task, therefore, is to try to decide which version to accept.

One of the researchers was kind enough to send me a copy of a narrative story that provides a useful overview. The essence is as follows: Catherine Kelly, along with her sisters Susan and Mary, and brother John arrived in America in about 1847. Their parents had both died in the Great Famine. They were cared for in America by an Uncle. They started off in New York before moving to Ann Arbor and then Marshall, Michigan. In Michigan, Catherine Kelly married Patrick McHugh. Patrick was also born in Ireland. In 1873, they moved to Missouri with their children. Catherine’s brother John had a farm there. One daughter, Anna, stayed behind in Michigan. This information came from ‘Great Aunt Grace McHugh’ in about 1964.

Stories such as these, that have been passed down through the generations, are always useful. In my experience they are usually accurate as far as shape is concerned, but some details may have become muddled. It is a good starting point with lots of clues to track down. The challenge is now to fill in the gaps. The next blog will start the process in earnest.