In February 2007, the National Archives (http://www.nationalarchives.gov.uk/ ) started putting soldiers’ records online. They started with surnames beginning with A and B. The process was complete by the end of 2008. Because I was searching for Patrick Stanley, I had to be patient.

The wait was made worse by the knowledge that there might be very little information to be published. Approximately 60% of records from the Great War were destroyed in a fire during the Second World War. Some records were saved. Others were reconstructed from information held in other government departments. Patrick was in receipt of a small pension due to his war wounds. If a government has to pay out money, then they seem remarkably good at making sure that the amount is correct. I was cautiously optimistic.

I was lucky. Patrick’s military record is reasonably comprehensive. It tells me that he joined the Manchester Regiment in October 1902. He signed his papers in Pontefract, Yorkshire. There were other facts on the record that convinced me that I had the right person. I will come back to these in a later blog. Of crucial importance in the short term, I learnt his place of birth. 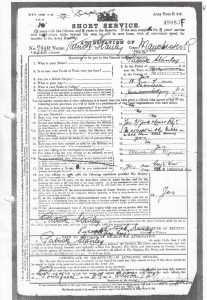 Having been provided with incorrect information by the General Records Office in Roscommon (see ‘Off in the wrong direction’) I was surprised to learn that Patrick was born in (cue drum roll and dramatic pause) Roscommon.