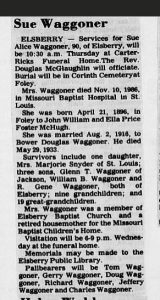 The 1986 obituary for Sue says that her parents were John William McHugh  and Ella Price Foster. Her father is also reported as John Edward McHugh. Is there any possibility that there are two people with very similar names? It is possible, but highly unlikely. I have already come across people who are commonly referred to by a name that does not even appear on their birth certificate.

The 1910 census has John E McHugh who was 53, born in Michigan. His wife Ella (born 1862) and three daughters are present. Maud was the oldest at 22, followed by Jessie at 19. Lastly there is Susan A McHugh who was born in 1896. It appears that the middle names for John are a case of “either/or but rarely both”.

The various family trees that reference John all seem to agree that he was born on 7th May 1856 in Michigan. Furthermore, there is a consensus that he died on 21st April 1918 in Missouri. There is less unanimity on the name and date of death of his father. The majority view is that his father was Patrick McHugh (no middle name) and that he died in 1908, in Missouri. Some refer to a Patrick Russell McHugh who died in 1885 in Chicago. One version says that his parents were Francis and Ellen. Tantalising, to me, is that Patrick Russell McHugh was said to be born in Roscommon.

There was clearly a sizeable family group under the McHugh name in Illinois. It would be tempting to put two and two together, but the answer would be five. I know that there is a DNA link to the Michigan/Missouri group. I have no evidence of a connection to the Illinois people. Perhaps the two groups are related. As I have found, almost every branch of the Stanley family calls the first born son John. Perhaps every branch of the McHugh family has a Patrick.

The dilemma here is a common one. How can we be sure that a person with a name match is the right person?