At regular intervals, I have to remind myself that these blogs are primarily focused on one man. That man is Patrick Stanley, who was born in rural Roscommon in 1883. He was my grandfather. He played a part in these events. World history perhaps, but also personal history.
War Diaries are full of a whole range of details. Sometimes the officer writing it seems to be struggling to make any meaningful entry. For example, ‘1,000 sandbags filled’ and ‘nothing doing’. Details of the distances marched are recorded. At the other end of the scale, some operations are recorded in incredible detail, with information on progress almost by the hour. Was someone taking notes in their pocket book whilst the battle raged? The reports are also curiously unemotional.
In April 1916, the Diary records, in considerable detail, the strength of the 2nd Battalion of the Manchester Regiment as being 25 officers and 967 men, for a total of 992. On 11th May, as a result of a heavy bombardment, they had seven men killed and another 12 wounded. Other casualties must have been incurred because they received 38 replacements on 28th May. They were involved in the early stages of the Somme Offensive, but were not in the first wave of attacking troops on 1st July. Their losses were not as catastrophic as some other units. Nevertheless, they received a draft of 219 replacements on 12th October, and another 21 men only two weeks later. It appears that they had sustained at least 25% casualties without being in the thick of the action. These replacements were ordinary men, just like Patrick. Some would have been married, with children, whilst others were single.
I cannot be sure of the exact date when Patrick re-joined his unit. The War Diary does not mention any replacements for quite a few days. I assume that it must have been around the 13th or 14th of November. From 1st to 12th November, the Battalion was in billets at Contay undergoing training. On 13th & 14th they moved to Bouzincourt. On the 15th they moved up to occupy Serre Trench. They were relieved from their positions on 20th November. What happened in between is scarcely believable. In summary, they were to attempt to capture Munich Trench. (See map – which is just about legible if your eyesight is good. Munich Trench is slightly to the left of the word Ridge as in Redan Ridge) 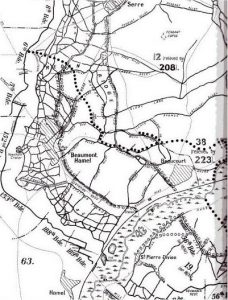 Even with access to many maps and accounts, the picture is confused. Due to a lack of progress on either side, they were exposed to cross fire and regular counterattacks.
During this short time in the trenches, the casualties are recorded in the main (handwritten) section of the War Diary as follows:
Officers: 2 wounded, 9 missing
Other ranks: 12 killed, 40 wounded, 252 missing (total 304)
These figures are bad enough. I cannot reconcile them with the more detailed (typed) account that is appended to the War Diary. “On the 21st, the Battalion (6 officers and 150 men) were moved back to the enemy original front line as support.” A Battalion, which had been 992 strong in April, was reduced to a fighting strength of just 156. When the replacements are factored in, that is a casualty rate of over 100%. Two of the four Companies were almost totally wiped out. The Thiepval Memorial (which records the names of those killed in the Somme campaign who have no known graves) has 50 names from the 2nd Battalion from that short period alone. Welcome back to the front line Patrick.