According to my Ordnance Survey Ireland map, Clooneenbaun in County Roscommon (where members of my family lived until 1908) sits on the 70 metre contour line. Lough Creevin, I km to the north, is 64 metres above sea level. Lough Slye, just south of the N61 is at 57 metres. As explained, and illustrated, in ‘What sort of place is Roscommon? (2)’ the land is poorly drained. 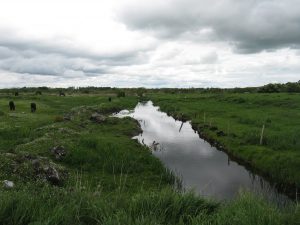 As long as the drainage ditches are kept clear, the water will find its way down to the rivers and thence to the sea.
(Photo taken north of Lough Creevin)

But this article refers to Belgium. I wanted to avoid stereotypical comments about Irish bogs. Other countries have bogs too! August 1917 was the third wettest August on record for England and Wales. Dublin had 192 mm (7.6 inches) of rain, nearly three times the average. The pattern of heavy rain extended from the British Isles into the near mainland of Europe. In particular, a lot of rain fell in Belgium. Patrick was not in Ireland by 1917. He was in Belgium, serving with the Manchester Regiment, whether he wanted to be or not. (And I very much doubt that he wanted to be there.) The rain was to play a significant role in the events of the next few weeks. They are forever associated with an insignificant village that stands 50 metres above sea level: Passchendaele.
To this day there is an obligation on the local farmers to maintain the drainage ditches. It is noticeable that the Belgian farmers use tractors with big fat tyres in order to spread the load. Routine maintenance is impossible when two armies are fighting over the land. Trenches were dug to protect troops, not to drain water. Earthworks were thrown up to provide some shelter from artillery shells. The shells left the landscape pockmarked with deep craters. Heavily laden wagons, with narrow wheels, created deep ruts on overused tracks. Thousands of marching feet caused more damage to the ground. As the rain continued to fall, the ground turned to mud. Some of the most iconic images of the Great War come from this particular period. An example is shown. 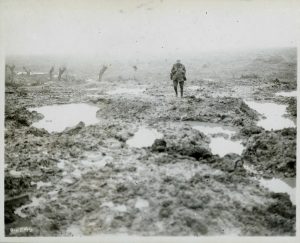 https://www.awm.gov.au/articles/blog/rain-mud-the-ypres-passchendaele-offensive
One of the best books on the subject was written by Lyn Macdonald. It was originally published in 1978 under the title, “They called it Passchendaele”. It was reissued in 2014, to commemorate the centenary of the Great War, simply titled, “Passchendaele”. I recommend it.