I visited Roscommon in 2014. I wanted to see for myself the places that my grandfather Patrick would have called home. I wanted to stand where he had stood. I wanted to walk where he had walked. The photos that I took on that trip have featured in these articles at regular intervals. In 2018 I found myself following in his footsteps once more. On this occasion I was unaware of the fact until later.
Many companies run tours of the battlefields of Belgium and France. The particular itinerary tends to determine the choice of hotel. In 2018 we found ourselves staying in De Panne, for a tour called “The Crimson Coast” (from Leger Holidays). This is in Belgium, but only just. The border with France is a few hundred metres from the town centre. The connection with Patrick came through reading the Regimental War Diaries. The entry for 4th August 1917 reads, “Battalion marched to billets in La Panne”. (The French spelling is La Panne. The Flemish spelling is De Panne.) They were previously based in Dunkirk, about 13 miles (20 km) down the coast.
On 12th August the battalion was inspected by the Queen of the Belgians. The Royal Family were staying in De Panne. It was one of the few parts of their country that was not in German hands, and was far enough from the front line as to be safe. They were based in four large, privately owned houses on the western edge of the town, with a view of the sea. 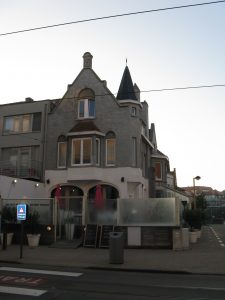 De Panne has been extensively redeveloped in the last 100 years. There is very little left that Patrick would recognise.  The photo shows a building (now a bistro) that once served as a dental surgery for the troops. That is about the only remaining building that was used in the Great War. The royal residences have been demolished.

A sea front hotel that was transformed into a massive hospital (with over 24 separate buildings) is now commemorated with a plaque. 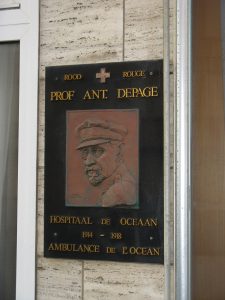 See http://www.depanne.be/product/1530/35-red-cross-hospital-locean
We stayed in a comfortable hotel, and were taken everywhere by coach. Patrick marched. The standard of billets varied. De Panne was used almost continuously by troops, on a rotational basis. Patrick could have expected to sleep in a hall or barn. It was probably dry, but comfort would be well down on the list of attributes.

Footnote: the last entry before the Battalion moved to De Panne is very revealing. “3rd August (1917). On account of the weather, outdoor training could not be carried out.” As covered in ‘Bogs in Belgium’, this is a reference to the torrential rain that fell. It was too wet to train, but not too wet to fight!