“Do not go gentle into that good night” Dylan Thomas

“I must go down to the seas again, to the lonely sea and sky” John Masefield

Robert Frost, Elizabeth Browning, Lewis Carroll, WB Yeats, John McCrae, the list of memorable poets and their works is a lengthy one. Poetry has the power to move, to inspire, to challenge. The BBC radio programme ‘Poetry Please’ has been running since 1979. Listeners are able to request favourite poems to be read out. There is a form of virtuous circle at work. The better known poems tend to be selected most often. Because they are read often, they become better known.

There are no objective criteria for what makes a good poem. It is a matter of personal preference. That is the reason why I have included the name of John McCrae in my list above. His output was relatively small. He is best known for one short poem in particular:

In Flanders fields the poppies blow

Between the crosses, row on row,

That mark our place; and in the sky

Scarce heard amid the guns below.

We are the Dead. Short days ago

Loved and were loved, and now we lie,

Take up our quarrel with the foe:

To you from failing hands we throw

The torch; be yours to hold it high.

If ye break faith with us who die

We shall not sleep, though poppies grow

It is short, accessible and gets straight to the point. He wrote it in May 1915 during the Second Battle of Ypres, following the death of a close friend. Lieutenant- Colonel McCrae was a Canadian army medic. Already there were many cemeteries. Some were sizeable, others less so.

They were well organised. There were rows of crosses. Many were established close to medical stations such as the ones in which he worked. After the war, the simple wooden crosses were replaced by the rows of identical headstones.

John McCrae did not survive the conflict. He died, of pneumonia and exhaustion, aged 45 in January 1918. He was buried, with full military honours, in the Commonwealth War Graves Cemetery in Wimereux, France. Among the mourners was Lieutenant-General Arthur Currie, Commander of the Canadian Corps. 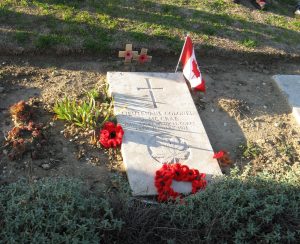