At school I studied poetry as part of the English Literature course. Having to analyse, criticise and deconstruct poems can drain the joy from reading them. Despite this handicap, there is one poem that sticks in my mind from that time.

I read avidly, and have done so from an early age. My local library when I was a teenager (Aldershot, Hampshire) was full of books on general military history, particular events and the people involved. I was fascinated by stories of the significant actions and people from the past. “Reach for the Sky”, “The Dambusters”, “Cheshire VC”, “The Longest Day”, “Carve Her Name with Pride”, “The Great Escape” are just some of the books that I read. I was, in a sense, “ardent for some desperate glory”. 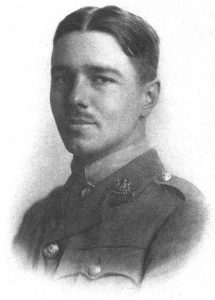 The poem that changed my view was, of course, “Dulce et Decorum Est” by Wilfred Owen. It had a powerful impact on me. It still has the power to move. He brings alive the suffering of war at a personal level. It is clear that he wrote from personal experience. Many years later, I discovered a personal connection. I will cover that in another blog.

Till on the haunting flares we turned our backs

And towards our distant rest began to trudge.

Men marched asleep. Many had lost their boots

But limped on, blood-shod. All went lame; all blind;

Drunk with fatigue; deaf even to the hoots

Of tired, outstripped Five-Nines that dropped behind.

But someone still was yelling out and stumbling,

And flound’ring like a man in fire or lime…

Dim, through the misty panes and thick green light,

As under a green sea, I saw him drowning.

In all my dreams, before my helpless sight,

He plunges at me, guttering, choking, drowning.

If in some smothering dreams you too could pace

Behind the wagon that we flung him in,

And watch the white eyes writhing in his face,

His hanging face, like a devil’s sick of sin;

If you could hear, at every jolt, the blood

Come gargling from the froth-corrupted lungs,

Obscene as cancer, bitter as the cud

My friend, you would not tell with such high zest

To children ardent for some desperate glory,