Quite early in the Great War, it became obvious that there would be many dependent relatives and wounded ex-servicemen requiring care. In 1914, responsibility for administration of Army pensions lay with the War Office and the Chelsea Hospital. 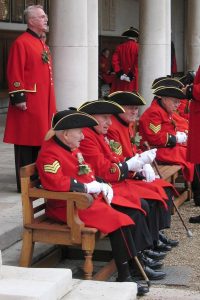 The system had coped with the numbers of wounded men from the Boer War and sundry other colonial conflicts. A new system was going to be required as the casualty lists increased geometrically. A Ministry of Pensions was established by an Act of Parliament in December 1916. A War Pensions Act was passed in 1921. It might be thought that the intention of the Government was to ensure that needy ex-servicemen were provided with support appropriate to their needs. Sadly, this was not the case.

In 1921, war pensions accounted for 7% of all Government spending. For comparison, the United Kingdom currently spends just under 5% on Defence. It also spends 20% on all pensions (including mine!). The latter figure is dominated by retirement pensions. Retirement age is currently 66 (2021). A pensioner can expect to live another 20 years. (19 for men, 21 for women.) Given that the majority of those affected at the end of the Great War were young (servicemen, their widows and dependent children) the liability was going to be long lasting. A number of servicemen from the conflict lived into the 21st century. Whether any of the longest lived veterans were in receipt of disability pensions is not known. Even Patrick, who was 35 when the war ended, lived for another 43 years.

How did the Government go about the task of reducing their current and future liability to care for the wounded ex-servicemen? (It should always be remembered that many of these men volunteered. They were motivated by a desire to serve King and Country.) A limit of seven years was imposed on making claims. Eligibility was no longer based on an ability to earn a living wage. A standard schedule was used. A different figure was used for those who had a leg amputated below the knee to those without the knee. Loss of two limbs entitled a man to 100%. Pre-existing conditions (even when the evidence for such was flimsy) could reduce payments.  A woman who married an ex-soldier would not be entitled to a pension in the event of his early death. This is a version of the legal principle of “volenti non fit injuria”. (Liability can be reduced, or even eliminated, when someone willingly undertakes a risk.) Furthermore, men were reassessed to determine whether their condition had improved since the initial award. This happened to Patrick. As far as I am aware, his award was not reduced. Men suffering from shell shock were particularly vulnerable to having their awards downgraded. There is a degree of subjectivity with shell shock that does not apply to amputations.

These tactics were effective. Between 1921 and 1939, there was a 60% reduction in the amount paid. Some of this reduction would have been due to children reaching full age. Some pensioners would have died.

There were some positive initiatives. The King’s National Roll Scheme encourage employers to give jobs to disabled servicemen. There were also training schemes. At some point, Patrick trained as a hairdresser.

Five different scales were used depending on rank. A private was in Class 5. A full 100% entitlement in Class 5 was £2 per week (40 shillings). This is equivalent to the minimum wage for an agricultural labourer. A builder’s labourer would have expected to earn twice as much.

£1 in 1920 is equivalent to approximately £45 today. Direct comparisons are difficult. There had been sharp inflation during the war. Wages doubled between 1914 and 1920. The National Debt had risen eightfold. A period of sharp deflation followed. Wages dropped by 22% in 1922. Prices in 1929 were more than a third lower than in 1919. Even in 1939, prices were still below 1919 levels.

Inflation is measured by tracking the movement in prices of a specific range of goods. This list is reviewed annually to ensure that it reflects the type of products that people are likely to buy. 60 years ago, the list included paraffin, pipe tobacco, ox liver, linoleum and the radio license fee. Spending patterns are always changing. What seems to be a constant is that disabled ex-servicemen do not receive a good deal from the Government. Patrick’s pension was 11 shillings a week.