Following service in South Africa with the 3rd (line) Battalion of the Manchester Regiment (https://www.roscommonstanley.me.uk/military/boer-war-concentration-camps/ ), Patrick was transferred to the 1st Battalion on 28 October 1906. He was sent to join them in India. The 1st Battalion had also served in South Africa, departing in December 1904. They arrived in the port of Madras (now called Chennai) on 20th December 1904. They were based at Entrenchment Barracks in Secunderabad. This city was established as a military base by the British in 1806 and is now part of the Hyderabad conurbation. Indian Railways currently shows a journey time from Chennai to Hyderabad of just over 13 hours. It is fair to assume that the troops were in their train for far longer. 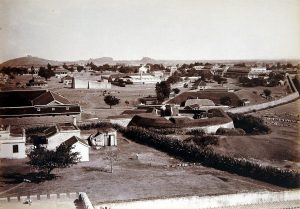 https://en.wikipedia.org/wiki/Tirumalagiri#/media/File:Trimulgherry_Entrenchment.jpg
Soldiers used to sing “It’s a long way to Tipperary.” The distance from Roscommon to Secunderabad is approximately 5000 miles (8,000 km). A recruiting slogan for the Navy said, “Join the Navy and see the world.” The same could be said for the Army. At that time, almost every Regiment in the Army would have had one Battalion at home and one serving overseas. Patrick was to spend nearly four years in India. The time in South Africa would have helped him to acclimatise, at least in part.
The biggest similarity between Roscommon and Secunderabad is the rainfall. (100 cm and 85 cm respectively) In India, the majority of the rainfall takes place in the monsoon, from late June to late September. If the monsoon is late, by even a few days, the papers start to write about it. Irish rain seems to fall any time it likes. The average (year round) high temperature in Secunderabad is 32°C and the low is 20°C. Temperatures over 40°C are common. The only place where snow will be seen is in an indoor theme park. (There is one in the neighbouring city of Hyderabad!) The combination of summer heat and humidity, as the monsoon starts, makes life very uncomfortable. The locals find it difficult. Europeans find conditions almost unbearable. Fortunately, troops were deployed to other parts of the country where conditions were slightly more bearable. There was a downside, as will be covered later.
Odd fact: Winston Churchill spent time at Secunderabad in the late 1890s.