Having failed to follow the trail of Elizabeth McDermott, what about James Mullooly? (James and Elizabeth were the baptismal sponsors for my Grandfather in 1883.)
In 1901, there are two families called Mullooly living in Clooneenbaun. In House 3, there is John (37), his wife Bridget and four young children. In House 4, there is another John (35), his wife Elizabeth, three young children and John’ sister Mary.
The Griffiths Land Census records the presence of John, Timothy and Michael Mullooly in Clooneenbaun. It appears likely that the two Johns were cousins.
In the adjoining Townland of Lissagallan, there is James (40), wife Bridget and three children (Michael, 9, Patrick, 7, and Joseph, 5). This is a good match. This man would have been 22 (born 1861) when Patrick was baptised. But (see below) he might have been 33!
By the time of the 1911 census, James and Bridget have both aged 25 years in the previous ten years. (James born 1846) Michael has died. Patrick and Joseph are only 11 years older! You have to love the fluidity of ages that appear on the records.
I looked for the marriage record of James and Bridget. On 20th April 1890, James Mullooly (a widower) married Bridget Mullooly (a spinster). He was already 40 (born 1850). My curiosity went into overdrive. James was the son of Laurence Mullooly. Bridget was the daughter of Timothy Mullooly. I assume that they were cousins of some degree. The earlier marriage took place on 8th February 1875 in the recently opened Cloverhill Church. He was 25 (born 1850). The bride was Mary Routledge. She died of heart disease on 13th November 1883. 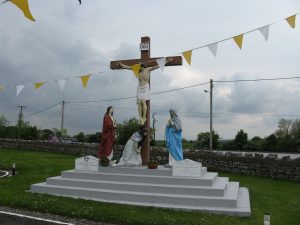 There are two records for the death of James Mullooly. In January 1939, the death of James, of Lissagallan was reported by his son Joseph. James was 80. Given that ages at death were often rounded, this is a very good match. Well, it is as long as I assume that the ages given on other records were only approximate. He could well have been nearer to 90 than 80.
The other death was in 1934. The death of a 72 year old man (born around 1862) from Cloonard (I am unsure of the spelling) was reported by his nephew Hubert McHugh. The only reason for mentioning this is that the name McHugh features on my DNA search. I am looking for a connection. Almost certainly, this isn’t it.
John McDermott and John Mullooly appear in the Griffiths Land Census with plots of land not far from Thomas Stanly. Thomas McDermott and Thomas Mullooly also hold land close to each other in the same Townland. There are lots of circumstantial links between the McDermott, Mullooly and Stanley families. Unless anyone has more information, that is about as good as it will ever be.