Having signed up for the Manchester Regiment in Pontefract on October 2nd Patrick arrived at the Regimental Depot in Ashton-under-Lyne (near Manchester) on October 4th. 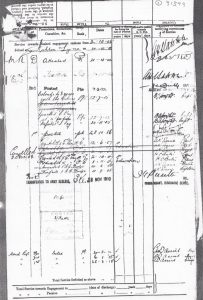 The writing is quite faint, but it appears to say that he was posted to the 4th Battalion on October 17th. At that time, they were based at Kinsale, south of Cork in the south of Ireland. Quite what Patrick would have made of being sent to Ireland is difficult to imagine. Perhaps he was able to offer his services as a translator!

On 7th February 1903 he was transferred to the 3rd Battalion. As explained in ‘Reorganising Regiments’ the Childers Reforms were intended to leave every Regiment with two regular (1st and 2nd) battalions and two reserve (3rd and 4th) battalions. So, Patrick was in the 3rd and hence he served in the UK, right? Well, no.

Again I am grateful for a chance comment made by someone at a Council. In this case it was Tameside Council. I was warned not to confuse the 3rd (Line) Battalion and the 3rd (Reserve) Battalion.

In the aftermath of the Boer War, there was significant demand for troops to be deployed on quasi-police duties. A number of regiments were authorised to raise extra line battalions to cope with the workload. The Manchester Regiment was one of these. Two new battalions were formed, the 3rd and 4th. The existing reserve units were renumbered as the 5th and 6th.

The 3rd was sent to South Africa starting in July 1902. Regular drafts of reinforcements were sent out in the coming months. One of these was as follows: 1 officer and 185 other ranks from the 4th to the 3rd Battalion. Some of the troops were deployed to St Helena. By early 1904 they were all in South Africa.

I can now make sense of what Patrick was doing. The returning men of the York & Lancaster Militia must have told him of their adventures in South Africa. They probably left out the bits about enemy action and disease. He discovered that other units were going to be sent out. In order to join them he had to become a regular soldier. By transferring to the Manchester Regiment he was able to see another country, another continent.