After six weeks in the militia, Patrick transferred to the Manchester Regiment. As discussed in ‘From Yorkshire to Lancashire’ and ‘Yorkshire and Lancashire History’ there must have been a very good reason for this move. 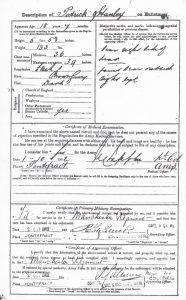 Before addressing that question, there are some things to pick up from the enlistment paperwork. He has put on 8 lbs in weight in 6 weeks. His maximum chest extension has gone up by 3 inches. Army life seems to have agreed with him.

His distinctive marks have changed. He now has a scar on the right side of his head and one over his right eye. The one on his buttock is not mentioned. His eyes are now brown/grey.

He may have acquired new scars in the intervening period (a fight possibly?) but the large scar would not have disappeared. Perhaps a medical on transfer from another army unit was less rigorous.