Following his birth in Roscommon in 1883, Patrick Stanley seems to have left no trace on official records until August 1902. On 19th August 1902, Patrick joined the 3rd Battalion of the Yorks & Lancs Regiment. His regimental number was 9988. This was a militia unit. He signed up for a period of six years. The first page of his attestation paperwork is shown. There are a number of interesting facts that stand out: 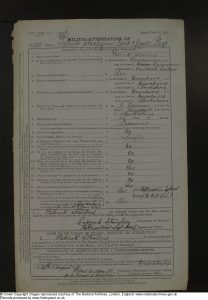