The story that has come down to me from my distant American cousins is that 1847 was a significant year for the Kelly family. John, Catherine, Susan and Mary arrived in America in that year following the death of their parents in the Great Famine. Census and marriage records provide some information on the ages of Catherine and Susan. I know very little about John and Mary. Were they younger or older than the other two?

There are a lot of immigration records in existence for people travelling from Ireland to America. It appears that all I have to do is to search through them to find the family. With a bit of luck, the ages of the other two would be recorded. If only life was that simple!

I started the search by restricting results to the period 1845-1852. This period covers the main famine induced migration. The Castlegarden.org website lists 9920 people called Kelly arriving in America in that time. Given the Irish fondness for recycling and reusing names, there are 1035 called Mary, 805 called John and 526 called Catherine. My search included the variations in names. I also looked for Kelley and O’Kelly as well as Cath*. Using the wildcard of * flushes out the main variations of spelling.

I downloaded all 22 records for Susan Kelly. I then sorted them by date of birth. (All of the records show an age on arrival.) The Susan that I am looking for should be 10 or 11 if all the information that I have been given is correct. I decided to look four years either side. I find it difficult to believe that a girl of 6 could be mistaken for one of 10, but I had to draw the line somewhere. It is slightly more plausible that a famine victim of 15 could pass for a girl of 11. If this is the case, then Susan gave birth to her last child at the age of 46. I have found mothers at 48, so perhaps I need to expand the search slightly.

Of the 22 girls (or women in some cases), two are definitely too young. 13 are too old, with dates of birth between 1830 and 1798. That leaves me with just seven. Four of these docked in 1852, which seems unlikely given the other information that I have received. The most promising vessels are as follows:

Looking through the passenger lists for these three ships does not provide the breakthrough that I expected. There is no Catherine Kelly. There is no Mary Kelly. Time for a rethink! 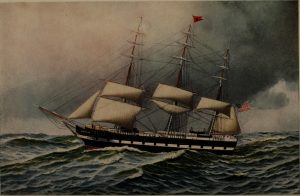 Picture: Fidelia, on which a lady called Catherine Kelly travelled to America, arriving in February 1849 (a winter crossing!). The only other Kelly on this voyage was James. The Fidelia’s displacement was 969 tons. She carried over 300 passengers.