Sometimes I have to stop myself and check that I am not going down a blind alley. Why am I looking for information on John Kelly?

In “Both ends to the middle – Part 2” I reported that there is only one ancestral line from the two distant cousins in America that I need to investigate. That is incorrect. In addition to Patrick McHugh, born 1825 (approximately) in Ireland, there is his wife, Catherine Kelly (born 1833). She also comes from Ireland.

At the time of writing (December 2021) I have not found either a Kelly or a McHugh in my family tree. In fairness, I have very few surnames in my Irish grandfather’s side of the family tree. There is Stanley (obviously!) and Scott, Ormsby (or Armsby) and that is it. The degree of match (35 centi-morgan) suggests that the common ancestor is four to five generations back. I could be looking at the parents of either Patrick McHugh or his wife Catherine Kelly. They are likely to have been born in the late eighteenth or early nineteenth century. The challenge is to identify them. And it is a significant challenge. There are four people, two surnames are known, two are not known and there are no Christian names.

I use the principle of starting with the known before moving to the unknown. I have been told that John, Catherine, Susan and Mary Kelly were taken to America as orphans during the Great Famine. I have dates of birth for Catherine and for Susan. If I can find dates of birth for the other two, then it should help narrow down the search for their parents and place of birth. As reported in “Looking for the Kelly siblings”, over 500 people called Catherine Kelly emigrated to America during the famine. I don’t know how many stayed, how many left for other places or died. It is a very common name. What will be far less common is a family with those four children born in the right period. And that is why I am looking for more information on John Kelly. 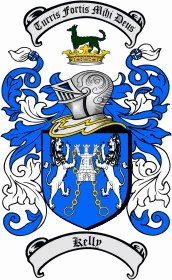 What facts do I have on John Kelly? I know that he was born in Ireland, and that he came to America during the famine. He had a daughter called Jessie who was born in 1869, apparently in Nebraska (see “Jessie:  early days”). John had a farm in Missouri which was subsequently run by Jessie’s son. The farm in Missouri played host to John’s sister Catherine and her husband Patrick McHugh in the early 1870s. They subsequently moved to nearby premises.

I do not know when John was born, the name of his wife, or when he died. I don’t know how many children he had, or when they were born. Circumstantial evidence points to a date of birth as 1832, and his wife being called Julia. As President Kennedy said, in another context entirely, we choose to do these things, “not because they are easy, but because they are hard”. Similar to looking for ancestors then!

My kit number on Gedmatch is WW2962088. If you have a match, no matter how small, I would love to hear from you.