It can be difficult to comprehend the level of overcrowding in Daw Green, Dewsbury at the end of the 19th century. The distance between the two circles on Princess Street is about 120 yards (110m). This was an area of very high density housing.

The National Library of Scotland website offers a useful facility to compare old and new maps. The streetscape has changed considerably. The central part of Thornton Street is on the same alignment. It has been extended at the western end and realigned at the eastern end. Some roads have been renamed. E.g. Princess Street is now called St Matthew Road. Kent Street has become Kent Walk. The High Street is still the High Street. What was New Street (home to various relatives from 1891 onwards) is now mainly taken up by St Paulinus Close. Other roads have disappeared completely. There is no trace of Asylum Road, nor of Back New Street. 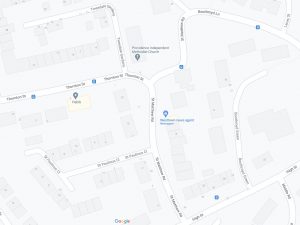 The 1901 Census has records for 23 separate dwellings in New Street, with a total of 44 rooms. 113 people lived there. This is an average of 4.9 people per house, or  2.5 per room. The greatest number was at Number 14. 11 members of one family, from three generations, were present. They were all packed into just two rooms. Back New Street has 23 dwellings (37 rooms) with another 84 people.

The National Trust cares for a small development of Back-to-Back houses in Birmingham. They were left, almost by accident, when the slum clearances took place in the 1960s. The dimensions are provided for two houses. One is 12’6” wide by 11’6” deep (3.8m x 3.5m). The other one is 14’6” x 11’0” (4.4m x 3.35m). The 1911 census returns make it clear that not all of the houses in a street were the same size. 12 Back New Street, home to Patrick’s brother John, had just one room. The kitchen counts as a habitable room, so it must have been a single storey building. Other houses further up the street had two rooms; one upstairs and one downstairs.

Google Maps offers a street view facility. The current houses in Daw Green (now called West Town) are not large by any stretch of the imagination. There are some two-bedroom terraced houses and one-bedroom bungalows in St. Paulinus Close. In this respect, there appear to be parallels with the past. But even a one-bedroom bungalow will now have a kitchen, a living room and an inside bathroom. That would count as four rooms on the 1911 census. There will also be a small garden. It is all social housing and qualifies for the lowest rate of Council Tax (Property Tax). They might be small dwellings by modern standards, but they would have been seen as unimaginably luxurious 100 years ago.