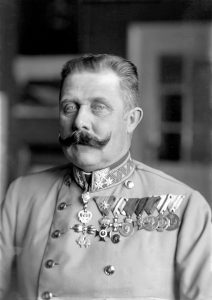 In July 1914, the national newspapers in England were worried about the prospect of a looming conflict. The assassination of Archduke Ferdinand (pictured) had taken place in Sarajevo on 28th June. Whether through deliberation on the part of some, or neglect on the part of others, this event led to the Great War. But the English press weren’t referring to the events in a distant part of the Austro-Hungarian empire. They were concerned about the situation in Ireland.

Pressure for greater autonomy from London was being resisted by unionists. The factions were largely split on religious grounds. The heavily Catholic majority in the south and centre of Ireland favoured greater, if not outright independence. Protestants were in the majority in the north of the country. They wished to remain closely linked to London. Both sides were arming themselves. It was understood that the Army might be called upon to intervene. But senior army officers were largely drawn from the upper strata of British society. A lot of wealthy families owned land in Ireland. They were predominantly Protestant. Much of the townland of Ballyglass Lower (referenced in ‘Ballyglass Stanley’), Roscommon, was owned by Lt. Col Raleigh Chichester, who did, in fact, come from a Catholic family. Many officers had already expressed an unwillingness to take action against co-religionists. This action is known as The Curragh Mutiny. The Army was hardly neutral.

At that time, Patrick was living with his sister Mary in Daw Green, Dewsbury. The area is now known as West Town. It was a very poor area, mainly consisting to back-to- back houses. It was home to a large Irish community. Dewsbury Irish National League Club (which was formally incorporated in 1900) is located there, and still acts as a focal point for those of Irish descent. Apparently, they serve a good pint of Guinness.

I doubt whether The Times (of London), or the Manchester Guardian, enjoyed a large circulation in Daw Green. The Dewsbury District News and the Dewsbury Reporter may have sold copies. As mentioned in other blogs (e.g. Always a Private) Patrick’s reading skills were poor. Others would have been better access to information. Patrick may not have read the source information, but that would not have stopped him having an opinion.

Word of mouth is a remarkably effective way to spread information. I imagine that opinions were freely exchanged in the overcrowded houses and streets of Daw Green. I can’t help wondering whether a consensus emerged among the Irish community. If Ireland gained greater autonomy, would some of the people be tempted to go back? They left in search of a better life. It can be argued that life in England was very hard, but there was work, and food. Many of them had lived in Dewsbury for twenty or thirty years. Some for longer than that. A few had married local people. Children had been born there, and would have spoken with a local accent. And for Patrick, there was a further complication. He knew that he was still subject to a recall if reservists were required. Where did his loyalties lie?