Patrick’s time in hospital in Brighton (1914) and Kent (1918) has already been covered. I have very little detail on the nature of his treatment. The experience of being transported from the battlefield to the hospital can only be covered by referring to more general texts.

Patrick would have been carried from the battlefield on a stretcher. Depending on the state of the battle, he may well have had to wait some time to be evacuated. He would have been jolted as the bearers struggled over uneven ground. 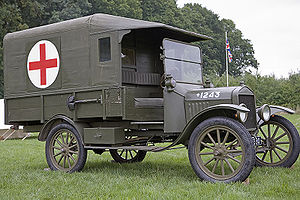 From the casualty clearing station he may have been taken by lorry. (Photo shows an ambulance based on a Ford Model T) The alternative would have been a horse drawn wagon.

Another uncomfortable ride in a vehicle with poor springing. The last part of the trip would have been by train. Due to severe overcrowding on the rail network, trains often took many hours to cover relatively small distances. (When the Battalion was being taken to the front in 1914, the train averaged less than 10 mph over a complete day.) Morphine was the most commonly administered pain killer at the time. It is very effective, albeit with side effects.

On a Friday in July 2021, I fell off my bike. I broke my leg. (This explains the gap between posts.) An ambulance was summoned. Having established that I was not bleeding, or unconscious, my case was assigned a moderate priority. The ambulance took just over an hour to arrive. It was a very uncomfortable hour, but I knew that I was in no danger of further injury from enemy action. I was placed on a stretcher, which was carefully wheeled into the vehicle. 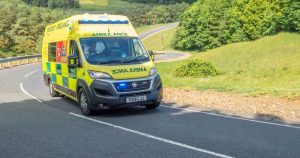 The crew immediately started trying to administer pain killing medication. (In this, they were only partially successful.) Even allowing for the many potholes in British roads, the ride was (relatively) comfortable. The ambulance was immaculately clean. (Picture  taken from the West Midlands Ambulance Service website) The journey to hospital was less than ten miles, and took about half an hour. (The emergency lights were not required.) The crew radioed ahead to notify the hospital of the nature of the problem. On arrival I was swiftly assessed, and then taken for an X-ray. Due to the impact of the pain killing medication, I lost track of time somewhat in the hours that followed.

Copious amounts of pain killers were administered until an operation took place to fix the problem (after the weekend). I was given antibiotics to prevent infection. Less than a week later I was discharged from hospital. On discharge, I was given enough drugs to start my own pharmacy business. Despite operating in the midst of the Covid-19 pandemic, the National Health Service performed well. I am confident of making a full recovery.

The contrast with Patrick’s experience a century earlier is quite marked. Many branches of medical science developed rapidly in the Great War. Lessons were learnt. Many of those lessons remain valid today. For critically injured people, every minute counts. The Americans refer to the ‘Golden Hour’. The objective is the delivery of high-quality medical treatment to wounded service personnel within one hour. Having helicopters helps in meeting this criterion. The medical services that treated Patrick did the best that they could, with the resources available at the time. They saved his life. Others were not so fortunate. I am glad that the full range of medical expertise was available to treat me in 2021.