The term ‘advantages of birth’ normally refers to those who were born into wealthy families. People who had decent clothes and good shoes. People who always had enough to eat. People with secure jobs, or those who did not need to work. People who lived in warm, dry houses, and slept in comfortable beds. People who didn’t need to be outside in the rain.

Patrick would have only had one set of clothes. He wouldn’t have had shoes whilst he was growing up in Roscommon. He had to work in order to be able to eat. There were occasions when he went to bed hungry. His bed was any flat space that was free. The places where he lived were mainly heated by the process of cooking, and the number of bodies in a small space. Some of them would have been damp and poorly ventilated. A lot of infrequently washed bodies in a small space would not have smelt good. An outside toilet was the rule. As a labourer, he was outside in all weathers.

The attractions of the peacetime Army are obvious to men such as Patrick. He was given a uniform and a pair of solid boots. He was fed regularly. (He put on eight pounds of weight and three inches on his chest during his six weeks in the Militia in 1902.)  He had a bed of his own, possibly for the first time in his life, which he was required to keep neat and tidy. Most of the barracks were dry. They had some form of heating, maybe sufficient only to warm up cold hands, but better than nothing. 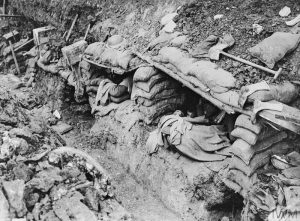 Move forward in time to the Great War. Life in the trenches was hard. Sometimes it was very cold. Sometimes it was very wet. Sometimes it was extremely hot and dusty. Men often slept where they could, if they could (as the photo shows) (IWM Q 4135). Deliveries of food, especially hot food, could be delayed by enemy activity for many hours. In 1914 and early 1915 it was cold food only. There were no flushing toilets in the trenches. Frequently there was the smell of poorly buried bodies. Men were rotated from the front line to reserve trenches and eventually further back for rest and recuperation. They would be unable to wash properly or change their clothes for many days, even weeks.

Life in the trenches was difficult for everyone. Perhaps Patrick’s upbringing made it slightly less of a challenge to him than for some others. Advantages of birth?