At the Battle of Waterloo, in 1815, estimates of the numbers of Irish born soldiers in the British Army vary from a third to a half. There were many exclusively Irish regiments. As stated in ‘Advantages of birth’, a life in the military offered certain attractions to the poor. (Regular food and clothing being the most immediate benefits.) Examination of the census returns shows that we should not be too surprised at the figures. In 1821, 32.5% of the population of Britain was in Ireland. (6.8 million out of 20.9 million.)

The percentage of Irish soldiers dropped significantly in the second half of the 19th century. If for no other reason, demographics alone would have caused a major shift. By 1901, Ireland represented only 10.7% of the population. The population on the mainland had more than doubled, whilst Ireland had seen a long period of decline. By the outbreak of war in 1914, about 1 in 8 of the regular Army came from Ireland.

The calculations of the number of Irish soldiers who fought in the great War vary significantly. 140,000 enlisted in Ireland. To this must be added approximately 50,000 who were already serving in some capacity. The latter figure includes Reservists (such as Patrick). These are the figures that are relatively easy to track.

The Dominion countries of Canada, Australia and New Zealand welcomed Irish born recruits. Canada has published data suggesting that 20,000 such recruits fought in the War. Figures for America are more elusive. There were 1.3 million Irish born Americans in 1914. Relatively few of these were of the right age, and not all would have volunteered.  Working on a pro rata basis to Canada generates a figure of 40,000. The last, largely undefinable group, are those who had moved across the Irish Sea in the preceding years and registered at Recruitment Centres near to their new homes. A grand total of well over 300,000 is quite credible. 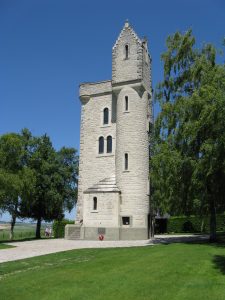 The number of deaths is also a subject of debate. The Registrar General of the Irish Free State puts the total of deaths at 27,405. Irish Memorial Records show 49,435. The latter figure probably includes men who died in what are regarded as Irish Regiments. (Picture: The Ulster Tower on the battlefield of the Somme.) As the war progressed, many Regiments were not able to fill their depleted ranks with men from their traditional recruiting areas. The Connaught Rangers would have been a logical choice for someone from Roscommon.  There were also men, such as Patrick, who chose to serve with other (English) Regiments. In his case, it was the Manchester Regiment. Patrick survived the War. If he had been killed, I doubt that he would have been mourned or commemorated in Ireland. There was no close family left in Roscommon. He would have been mourned in his adopted home of Brighton.

Curious fact: citizens of the Irish Republic are still entitled to serve in the British armed forces. It is estimated that some 4,000 do so today.