Patrick was evacuated from France on 15th October 1914. After time being treated at the 2nd Eastern General Hospital in Brighton, he was posted to the 3rd Battalion of the Manchester Regiment on 6th January 1915. At that time, they were based in Cleethorpes, on the East Coast of England. In the minds of many, this was a safe posting. In April 1916, long after Patrick had moved on, a bombing raid by a Zeppelin caused the deaths of 31 men from the 3rd Battalion.
The purpose of the time spent with the 3rd Battalion was twofold. Firstly, it gave Patrick additional time to recover fully from his wounds. Secondly, he could pass on the benefits of his experience to soldiers who had not been in combat.
On 25th March 1915, Patrick was back in France. This time he was to join the 1st Battalion. He was one of 113 NCO’s (Non Commissioned Officers) and men that reported to the Battalion on 27th March. Two days later, another 137 reinforcements joined them. At that time, the battalion was resting in billets away from the front line. After duty in the trenches, their next spell in billets was spent at L’Epinette. This is less than a mile from the place where Patrick had been wounded in October 1914. I wonder whether he was aware of this fact.
The War Diary has entries such as:
10th April: A very quiet day
11th April: Nothing of importance happened during the day.
13th- 20th April: rested in billets
24th April: left L’Epinette 1:30 pm. Arrived Boeschede 11:30 pm. Distance 23½ miles.
25th April Left Boeschede 6 am. Arrived camp near Vlameringhe 10:30 am. Distance 12½ miles
The entry for the following day is very different. For one thing, the handwriting changes. I am sure that Patrick was unaware of the fact, but he was about to take part in the 2nd Battle of Ypres. It was during this phase of the fighting that the historic town of Ypres was almost totally destroyed. 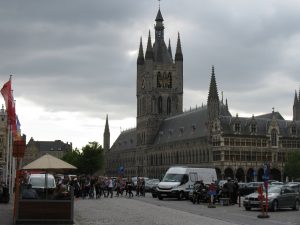 What can be seen today (Cloth Hall, pictured) was rebuilt in the 1920s. Three days earlier, poison gas had been used in battle in this sector for the first time. The 1st Battalion attacked from a position near Wieltje, north east of Ypres. The battalion lost one officer killed and 11 were wounded (which explains the change of handwriting). Amongst the other ranks, 25 were killed, 206 wounded and 56 were missing. That equates to a 30% casualty rate. One of his comrades, Issy Smith, won a Victoria Cross for his actions in rescuing wounded men on this day. Patrick’s battalion was not the only one to suffer such losses. There are ten cemeteries run by the Commonwealth War Graves Commission within a mile or so of Wieltije.
As the battle continued, so the casualties mounted. Replacements also arrived on a regular basis. On 23rd May, the writer of the War Diary records that reinforcements to date totalled 1,449. This means that every man on the regular strength had been replaced an average of 1½ times. They had been in India at the outbreak of war. They only reached the front line in late October 1914. Casualties appear to have run at an average of 200 per month. The diary continues:
1st June: Fairly quiet day – 3 men wounded
2nd June: very quiet day – 2 men wounded
3rd June: 3 men wounded
4th June: No casualties. At last! A day without any men being wounded or killed.
There is no way of knowing how serious the injuries were. Some men could have been wounded and then returned to the unit more than once. What I do know is that Patrick left France on 27th June 1915. He spent the last three months of “his first period of engagement” at the Regimental Depot in Ashton-under-Lyme, Manchester.