One of the consistent elements of the story that my father passed on concerns the fate of other relatives in the Great War. Patrick is said to have met other family members whilst in the Army. At least a couple of these did not survive. One version said that these were brothers. His Irish born brother John was 38 at the outbreak of hostilities (born 1866). He was too old to fight. The other two brothers, Michael and Thomas, died in Roscommon.
In the blog “More about Mary’s brother John” I tell the story of John (born 1866) and his son John (born 1898). The younger one died on active service in 1918, aged 20. He served in the 5th Battalion King’s Own Yorkshire Light Infantry (KOYLI). Patrick was his uncle.
In “Dewsbury once more” I concluded that there is a definite link with the family referred to in “More Stanley people in New St Dewsbury”. I refer to another John Stanley (born 1856) who married Ellen Kenny. By 1911, the family are living at 52 Wilmans Yard. Among their children was Edward, born in 1895. He was one of the children who was born in New Street. A search of the Commonwealth War Graves Commission website reveals the following record:
Stanley, Edward
Service Number 17069
Died 25/07/1916
Aged 21
“A” Coy. 8th Bn.
King’s Own Yorkshire Light Infantry
Son of John Stanley, of 52, Wilman’s Yard, Dewsbury, Yorks; husband of Mary Stanley, of 78, Western Rd., Southall, Middx.
Edward is commemorated on the Thiepval Memorial. (Pictured) 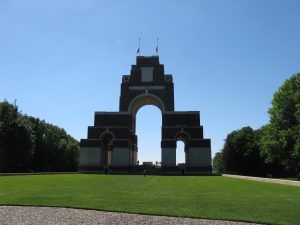 This memorial contains the names of 72,337 servicemen, from the Somme offensive, who have no known grave. The Somme offensive started on 1st July 1916 and finally ended in November of the same year. It was one of the most costly campaigns in British military history.
Edward served in the same regiment as John (born 1898), although in different battalions. I think that they were second cousins. However, they would have grown up together. Patrick, who was a few years older, would have known them from his time spent living with his sister Mary. I doubt if the distinctions of first or second cousin would have been relevant. They were kin.
I have found the record of Edward’s marriage. Edward married Mary Colleran, in Dewsbury, in the second quarter (April – June) of 1916. He was married for a matter of weeks. Whilst Colleran is an Irish name, Mary’s father was born in Dewsbury, as was she. I do not know why she was living in Middlesex by the time that Edward was commemorated.
The evidence has now emerged that two of Patrick’s relatives did not return from the War. My father’s version of events was correct.