A wave of patriotic fervour swept the country when war was declared in August 1914. Thousands of men, in every part of the country, responded to Lord Kitchener’s call for volunteers. Over one million men had enlisted by January 1915. And by January 1915, it was clear that, far from being ‘all over by Christmas’, the conflict was set to go on for a long time. The flood of volunteers had decreased somewhat, although it was still substantial, as the chart shows. 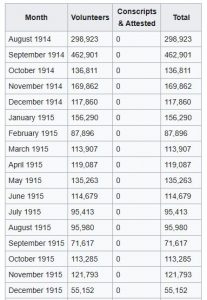 (Accessed from Wikipedia, based on UK Parliamentary Papers from 1921). As the casualties mounted the subject of conscription began to be discussed. At the time, only 60% of British men over the age of 21 had the right to vote. Edward Stanley (whose story was covered in Casualties of War) did not have the vote. The idea of forcing men to fight when they had no input into the political decision making system was seen as controversial. Ultimately, in 1918, the Representation of the People Act made major changes to the size of the franchise. This is just one more example of the massive changes to society that flowed from the Great War. That was in 1918. In the interim, the Government had some difficult decisions to take.
The National Registration Act was passed in July 1915. It came into force a month later. It created a register of people between the ages of 15 and 65. In effect, it was a mini census. The information collected enabled the Government to assess the impact of various schemes for implementing conscription. Patrick’s details would have been added to the register when he was discharged from the Army in October 1915. This explains the confident comment about the termination of his ‘first period of service’.
Conscription was introduced in the Military Service Act which was passed on 27th January 1916. It came into force on 2nd March that year. All single men between 18 and 41 were included, subject to certain exemptions. It was extended in May 1916. At this point, married men were included, and some of the exemptions were removed. Clause 5 of the original Act was dropped. https://www.legislation.gov.uk/ukpga/1916/104/pdfs/ukpga_19160104_en.pdf This Clause provided an exemption for ‘men who have been discharged from the naval or military service of the Crown on the termination of their period of service’. This simple change meant that Patrick became liable for conscription. 31st July 1916 finds him back in the Army. I imagine that he was even less enthusiastic than he had been in 1914. Ironically, if he had gone back to Roscommon then he would have been exempt. Conscription legislation did not apply to Ireland.