In ‘Lessons in geography’, I questioned the extent to which the rank and file troops had much understanding of the geography of the land. I also wonder about their perception of the overall state of the war. Rumours circulate in most organisations. There were many mechanisms for information, and misinformation, to flow in the Army. Troops regularly rotated to the rear areas for rest. Supplies were always being brought up from depots. New men came out from England to replace casualties. Conversations would have taken place at every point. I am sure that the long serving troops (which included Patrick) would have retained a healthy cynicism. The acid test would be your own experience. If your unit continues to take casualties, and hasn’t advanced for months, then you will be inclined to discount a rumour about an imminent victory.

I have gone back to the Battalion War Diaries to see what the ordinary soldiers might have noticed as the war progressed. I started by looking at March 1916. (Patrick was in England at this time.) On 1st March, the 2nd Battalion of the Manchester Regiment took over a section of the trenches. They spent eight days in the front line, followed by six days in billets resting. This pattern continued for at least the next 10 weeks. The longest time spent in front line trenches was eight days. The shortest period was three days. Time spent in billets was either five or six days at a stretch. They regularly alternated with the 1st Battalion of the Dorset Regiment. This arrangement would have provided incentives for both units to keep the billets and the trenches in good condition.

I then looked at March 1918. (Patrick had been back on the Western Front for over a year by this point.) On the 1st, the Battalion was in the support trenches, just behind the front line. No casualties are recorded, but they were still in a position of considerable danger. They were well within artillery range. They were relieved on the 3rd, and spent the next 11 days somewhere safer. After just three days in the front line, they moved slightly further back. This all took place in Belgium. The Spring Offensive was launched on 21st March further south. The Battalion was then moved down to France as the defences came under extreme pressure. They took up a position in the front line on 31st March. There appears to have been a lot of redeployment of troops taking place. Only one day later they moved to the so-called Purple Line, near Adinfer (6 miles south of Arras). This has been described as the line of last resort. Withdrawal was not an option. The men were expected to either repel all attacks or die in the process. I would love to know how this dire message was communicated. Perhaps only the senior officers were told. The war that was supposed to be over by Christmas (1914) was evidently going badly more than three years later.

Patrick and his colleagues were finally relieved after 25 days. This is three times longer than the pattern two years earlier. In that time, War Diary records that the Battalion had lost 17 killed, three were missing, 19 had been gassed and 104 wounded (a total of 143). The majority of the dead were buried at Quesnoy Farm Cemetery (pictured), (https://www.cwgc.org/visit-us/find-cemeteries-memorials/cemetery-details/65206/) about 2 miles south west of Adinfer. The Battalion headquarters had been located in this area. I assume that the Regimental Aid post was nearby. 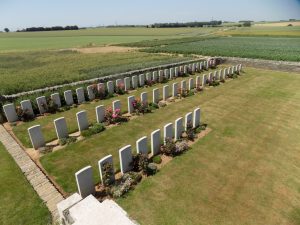 Comparison with the Commonwealth War Graves website shows that the actual death toll was higher than reported in the War Diary. For example, one man is buried in Rouen. This is many miles behind the front line. Presumably he died whilst being evacuated back to England. There is no way of knowing when he was wounded. Another man’s name is recorded on the Pozieres Memorial. He has no known grave and must be one of the missing. Others died after being moved to an Advanced Dressing Station. All of the casualties were buried in cemeteries close to the scene of the Battalion’s action in April 1918. It is reasonably certain that they were injured close by. The death toll in the 25 day period was 26, 50% above the War Diary figure.

It is unlikely that they were at full strength at the beginning of this period. Many battalions were down to 6-700 men. This represents a casualty rate of one in four or five. The seriousness of the situation must have been evident to everyone.