In ‘Bogs in Belgium’, I recommended a book by Lyn Macdonald. I am currently reading another one of her books. This one is called ‘To the last man’. It deals with the German Spring Offensive of 1918. In one of the maps, I noticed a place (Ayette) that is mentioned in the War Diary of the 2nd Battalion of the Manchester Regiment. They took up position there on 1st April. I found it fascinating to compare the two documents. The book blends personal recollections with an oversight of the context of the campaign. The diary is solely focussed on events within the experience of the Battalion. It lists places without explaining where they are located. The writer and the intended readership (officers at headquarters) would have maps. Because units took over trenches and billets from other units, the names would have entered common use. A detailed explanation was unnecessary.

I started to wonder whether the troops had much understanding of the geography. Possibly so, and possibly not. They marched. They fought. They died/were wounded/lived to fight another day. And repeat, over and over again. 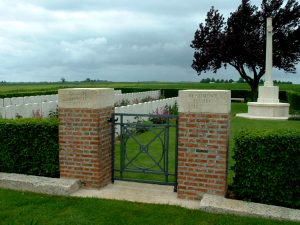 Ayette and the Purple Line (the line of last resort), is approximately 6 miles from the site of the Battle of the Ancre. This battle is where the 2nd Battalion had been reduced to a fighting strength of just 156 some 16 months earlier. The furthest point of their advance is marked by Munich Trench Cemetery (pictured). (See the Commonwealth War Graves Commission website for full details.) Were any of them aware of this fact? Many villages had been reduced to rubble. The second photo shows the site of the village of Thiepval. Even a former resident would struggle to identify particular buildings. There were relatively few landmarks in the surrounding countryside.

I then went back to the location of Patrick’s Battalion on 21st March. They were in the vicinity of the Houthulst Forest. This is approximately 6 miles from Wieltje. It was from this point that Patrick’s unit (he was in the 1st Battalion of the Manchester Regiment at that time) launched its attack at the 2nd Battle of Ypres in April 1915. Would he have been aware of this? I very much doubt it. A battlefield is not the place in which to indulge in sightseeing. The safest option is to keep your head down.