As mentioned in ‘Would not start from here’, the War Diary appears to have been written in an exercise book. Compiling it was the job of one of the officers. The handwriting is reasonably legible. To help the reader, place names are generally written in capitals. I thought that tracking the journey of the 2nd Battalion of the Manchester Regiment would be easy. Not so!

Some of the places have been recorded incorrectly. There is a reference to an encounter with Uhlans (German cavalry) at Pierre Grands. I am certain that it should be Pierrefonds. This is based on locating the places either side in the diary and the practical limit on how far the troops could march in the time. I used this technique to locate Saintines (written as Saint Mies). Some places are very small and need a lot of seeking out. A reference to “Sablieres” (near Crepy-en-Valois) turns out to be La Grand Sabliere, which just means the big sand quarry.

The other problem is that the geography has changed in the last 100 years. On 23rd August, the 2nd Battalion took up position ‘on a canal’. But which one? Other sources reveal that it was the Mons Conde canal. This canal was rerouted in 1968 to make way for a motorway (the A7, which passes just to the north of Saint-Ghislain, west of Mons.)

It is not clear when the diary was completed. Some days ended very late. Other days started very early. And, it should always be remembered, they were under fire on a regular basis.  They were taking part in a fighting retreat for the first two and a half weeks. In these circumstances, it is hardly surprising that a few details are incorrect.

On some days, the Diary records the distance covered. Other times it does not. It is impossible to know exactly which route they took. I have made my own estimates based on the likely roads to have been chosen. By my analysis, they marched 230 miles in 16 days. This is equivalent to marching from Brighton to Sheffield, or from New York to Washington. On one day (27th August), they marched 39 miles. That represents 13 hours on the road.

They first went into action on 24th August to the north west of Mons (in Belgium). They ended at Tournan (5th September), to the east of Paris, just south of where Euro Disney is now located. The weather was mainly dry, warm and sunny. They would have been carrying all of their kit. (The kit weighed around 25kg (55lbs) but could easily have been 20% higher than this.) They would have been hungry, thirsty, dirty and very, very tired. During the retreat, they suffered 63 fatalities and countless wounded. Many of the wounded would have been left behind to be captured. How did that feel, to leave your best mate to an uncertain fate? 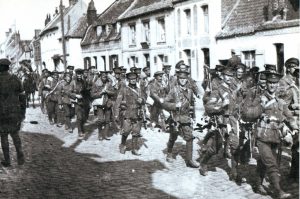 I have to wonder at what point the excitement and optimism that pervades the early entries in the War Diary began to dissipate. The 26th August was marked by relatively little marching, but a lot of fighting and heavy casualties.  At the end of that day, there were only 8 officers (out of the original 27) and 240 men (from 988) present at the muster. The Battalion had been reduced to a quarter of its original size. Others were able to re-join later, such was the chaotic nature of the battle, but the losses were heavy.

In Britain, 33,204 men volunteered on 3rd September. How little they knew about what awaited them.