The mobilisation of Reserves was signed into law on 4th August. Patrick reported to the Regimental Depot (at Ashton-under-Lyne, near Manchester) the following day. Two sizeable groups of reservists joined the 2nd Battalion in Ireland on the 7th and 8th. These were probably men from the Special Reserve. They had 3-4 weeks of training every year. There were also some men who had recently left full time service. In both cases their skills would have been relatively current. Patrick had been out of the Army for 3 years and 10 months. He was less than two months from being beyond the reach of any recall of reservists.

To start with, he had to be re-equipped. There were new boots to break in. He also needed some refresher training. The British Army prided itself on a rapid, and accurate, rate of fire. Those skills needed to be rediscovered. As a labourer, he should have been physically fit. This is not to say that he was used to marching long distances whilst carrying a rifle.

As reported in Part 1 of this story, the battalion had a rough time in the first month of the War. Many of those who were sent from Manchester to Ireland and then France & Belgium were already dead, injured or were prisoners of war by the end of August. The Commonwealth War Graves Commission records the names of 63 men from the Battalion during that period.

Along with some other recalled reservists, Patrick landed in France on 30th August. The first challenge facing the officer in charge was to locate the Battalion. Le Cateau, from whence the Battalion had started their long march, was in enemy hands. On the 30th, they (what was left of the Battalion) reached Attichy, a few miles east of Compiegne. They moved another 80 miles south in the next five days. The rendezvous finally took place at Tournan-en-Brie (east south east of Paris) on 5th September. The War Diary records “the 1st reinforcements from base”.

The 5th September represents a turning point in the early stages of the War. An advance started after nearly three weeks of steady retreat. I have to hope that Patrick’s boots were comfortable by this point. The Battalion marched just over 80 miles (generally north) in the next eight days. Their track of advance was approximately 10 miles (16 km) to the east of their earlier line of retreat. The rapid movements in this sector finally ended in the middle of the month. Patrick and his comrades spent just over a week in close proximity (350-550 yards) to the enemy before being relieved. They were shelled and subject to sniper fire. The advance seems to have been more hazardous than the retreat. They suffered another 70 deaths in that period. 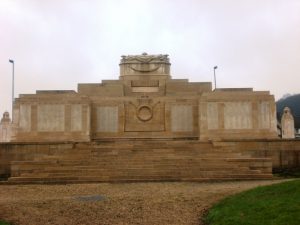 Among the dead was Private Richard Metcalf. He died on 16th September 1914. It wasn’t his name that caught my eye, but his service number: 7989. Patrick’s number was 7994 – just five different. It is likely that they joined at pretty much the same time. If it was a reunion of old comrades, then it wasn’t a long one. Private Metcalf is one of 3,765 names commemorated on the La Ferté-sous-Jouarre Memorial (pictured) overlooking the River Marne.