When the Great War started, Patrick, from Roscommon, was living in England. He was in Dewsbury, Yorkshire. As a reservist, he could live where he liked. Most of his close relatives were in Dewsbury, so that is where he went after completing his eight years of service in the Army in October 1910.

His Battalion (2nd Battalion, Manchester Regiment) with a home depot in Lancashire, was in Ireland. They were located at the Curragh, in County Kildare. The British Army had established a training base at the Curragh early in 1855. The move was prompted by the outbreak of the Crimean War. The land around it was seen as being suitable for training large numbers of soldiers. Another base was established at the same time, and for the same reasons. Aldershot in Hampshire was chosen due to its proximity to areas of heathland. Both bases are still in use today. The flag flying over one of them has changed.

Preparations for war started even as the efforts of the diplomats continued. Leave was cancelled. High speed communication in 1914 meant sending a telegram. It was better to keep the troops close at hand than attempt to track them down later. The Manchester Regiment received orders to mobilise late in the afternoon of 4th August. Their War Diary started the following day. There is a sense of real excitement to be found in the relatively brief entries.

On the 7th and the 8th, they received substantial drafts of reservists (200 and 400 respectively) to bring their number up to full strength. These men probably came from the Reserve Battalions in England. Whilst the 2nd Manchester Battalion was a ‘Regular’ unit (as opposed to the large number of so-called Kitchener battalions that were formed later) it does mean that more than half of their numbers were men who had been in other occupations only a few days earlier. 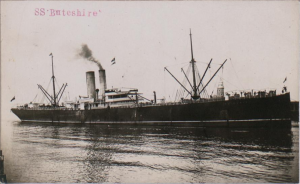 They left the Curragh on 13th August on two trains (1015 strong if my mathematics is correct.). The immediate destination was Dublin. The following day they embarked on a ship.  The War Diary appears to have been written on an old exercise book. It is just about possible to work out the name of the ship. It was the SS Buteshire (pictured), built in 1893 on Tyneside and displacing 5,574 tons. This was a reasonable size for the time. It may have been substantial, but it wasn’t particularly fast, at 12 knots (approximately 14 mph, 22 kph). It was primarily a freighter with some passenger accommodation. It had spent most of its working life serving Australia and New Zealand. The officers were probably comfortable on board. The other ranks less so. They arrived at Le Havre (France) late on the 16th. It took most of the following day (17th) to complete disembarkation and “entrain”. They travelled by train to Le Cateau-Cambresis. The journey took 16 hours. The distance is about 200 miles. Their average speed on land was slightly slower than their speed on the water.  In a confused situation, they were in action only a few days later. Their first death due to enemy action took place on 24th August. Patrick would join them a few days later. What happened in those days is another story.

Curious fact: The first submarine telephone cable between Dover and Dunkirk was only laid in 1914. It probably saw far more traffic than was originally anticipated.