60% of the service records for soldiers from the Great War were lost in a fire during the Second World War. Fortunately, in terms of my research, those for Patrick Stanley were amongst the other 40%. My main interest, when I accessed the record for the first time, was to find Patrick’s place of birth. If his service record had been destroyed, it is questionable whether I would have made any progress. Prior to that point, all that I knew was that Patrick was Irish. Even his date of birth was subject to doubt.

Once the search for Patrick’s roots was underway I was able to revisit the service record. In the time before computers, there was a lot of handwriting to be done. There is an impressive amount of detail contained in every record. The dates of service overseas are recorded. Someone would have been tasked with updating the record of every single soldier when a Battalion moved, for example, from South Africa to India. If a soldier was awarded a Good Conduct Badge, it was recorded. If he forfeited an award, it was recorded.

Patrick’s record card is well populated. In 1905, whilst in South Africa, Patrick extended his period of service, from three to eight years. As a consequence, he was awarded extra pay (at the rate of 4d per day). At that time, the basic rate for a Private was 1s (12d) per day. Service overseas attracted a supplement of 1 d per day. Four months later, he forfeited 1d per day. The reason is not stated. (Prior to decimalisation, £1 = 12 shillings = 240d.)

In June 1907, whilst in India, a Class I proficiency award was made. This was worth 6d per day. The entry was countersigned by Lieutenant W K Evans. In October 1907, it looks as if another award was made. (It is difficult to be sure as there are crossings out of some entries.) In November 1907, he was reduced to Class 2, with a note referring to ‘Education’.

In June 1908, Patrick was given a Good Conduct badge. Three months later he forfeited the Good Conduct Badge. These entries are countersigned by W K Evans, now promoted to Captain.

Patrick’s pay was going up and down like a yo-yo. What was going on? It is difficult to be sure. It is possible that one of these disciplinary hearings relates to the incident on the North West Frontier. According to my father, Patrick had a temper, and he liked a drink. That makes him a member of a large, and not very exclusive club. We have to remember that this all took place in India. Temperatures in the middle of summer can exceed 40º C. When the monsoon breaks (in the middle of June) average humidity rises above 70%. These conditions would be enough to test the patience of Saint Patrick. It is clear that Private Patrick Stanley was no saint. 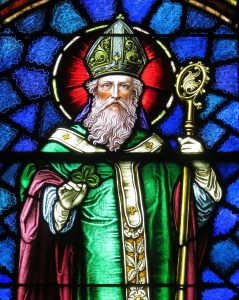