Part 1 was really an extended preamble. How do the principles apply to ‘the man in the street’? We have to move from the known to the unknown. What information do we have with which to start? We might have locations. Ideally these are Townlands, because they are the smallest unit of area, often with only 20-30 families in each one. Church and civil parishes are referenced on records. Most people (but certainly not all) did not move far within Ireland.
We have dates. If we have the record of a birth of a James in 1850, then a marriage of someone with the same name in 1860 must be from a different branch of the family.
We have surnames. The names of witnesses to marriages and baptismal sponsors can provide clues. (People tend to select family, friends and neighbours.) A Christian name appearing for the first time is likely to be significant. (Most families tend to recycle names. A different name might indicate a connection to another family.)
The final clue is DNA. My four times great grandparents were born sometime around the mid 1700s. This is the so called ‘line of 32’. I can make the simple, but very reasonable, assumption that the DNA generated connections are evenly distributed across all branches of my family. This means that there are approximately 1000 people (from the ‘outer circle’ – see Part 1 for an explanation of the term) who have DNA links to my four times paternal great grandfather in Ireland. I know nothing about him, other than that his surname was Stanley. Even from within the ‘inner circle’, there should be eight or nine people.
On an even more optimistic note, I can surmise that about 7,500 people (one quarter of the 30,000 with a DNA link to me) have some connection via my Irish born grandfather.
The title of this blog is ‘from both ends to the middle’. You might wonder about the reasons behind the choice. I have accepted that there is a limit to what I can determine about my Roscommon ancestors through conventional research. I am sure that others feel the same way. DNA provides the link in the middle. Even if, individually, we have very little information to share, eventually a pattern should start to emerge.
Let me give an example. I have corresponded with two people in America with whom I share some DNA (32 cM). They are related (first cousin level). Hence we only need to look at the ancestors that they have in common. Only one line in their shared tree came over from Europe in more than 350 years. The name is McHugh and emanates from Roscommon or Galway in the late 1790s. Patrick McHugh, son of Fergal, was born in 1825 and emigrated to America, landing in New York in 1850. 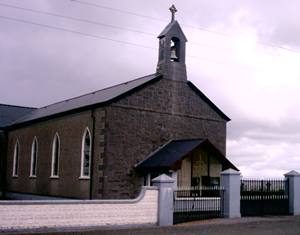 In 1873, in St Patrick’s Church in Granalahan, Kiltulagh, Roscommon, there was a marriage of John Ormsby (possibly Armsby), son of John (deceased), to Bridget McHugh, aged 20, daughter of John McHugh (also deceased). One of the witnesses was Ellen McHugh. St Patrick’s Church is close to the Galway border. It is about three miles south west of Ballinlough. On the 1901 census, there is a Stanley family living in Ballinlough. Thus far, I have not been able to connect them to my clan. My Great Grandfather, John Stanly, married Bridget Ormsby, at St Bridget’s, Four Mile House in 1865. If you kept a card index, there would be notes cross-referencing all of this information. At this stage the ‘dots’ are a long way from being joined up. We have some ‘cribs’: McHugh, Ormsby, Ballinlough, Stanley, New York, America. Who knows where this might lead?