When I started out on this voyage of exploration, in 2007, I knew almost nothing about my grandfather’s origins. I have discovered a lot in the meantime. I have files full of information. Perversely, there now seems even more that I don’t know. This is where you need to check out Donald Rumsfeld. In 2002, the US Secretary of Defense referred to known unknowns and unknown unknowns. He was widely ridiculed at the time, quite unfairly in my opinion. He is still ridiculed by some. 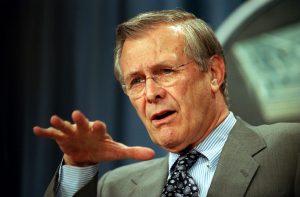 There are now many areas where I am aware that I do not have answers. These are my known unknowns.
Photo source: https://en.wikipedia.org/wiki/There_are_known_knowns#/media/File:Defense.gov_News_Photo_020221-D-9880W-080.jpg

At a relatively early stage I came to realise that there were only a small number of families sharing the Stanley name in Roscommon. I assumed that there would be some link between them. I even constructed a family tree that showed how the connections might work. I think that this was a reasonable assumption to make. Reasonable perhaps, but wrong.
When I published ‘Ballyglass Stanley’ in July 2019, (https://www.roscommonstanley.me.uk/possible-relations/ballyglass-stanley/)  I contacted by another researcher. John Stanley, son of James (died 1880) married Mary Grehan (or Graham) in January 1882. They emigrated to America that same year. Their first child (James) was born in Cincinnati in late 1882. This is the line from which the other researcher is descended. This information saved me a lot of work looking for John and Mary. The main drawback lies with the DNA. We share no discernible amount of DNA. This means that there are two distinct Stanley families in a very small area.
Fast forward to 2020. I have been contacted by a third researcher. He is descended from Michael Stanley, born 23 July 1851. Michael’s parents were John Stanley and Bridget Kelly. They married on 25 August 1843 in Creggs Church. There is more on this family in ‘Celina, Celenia, or Selina Stanley, Connor or Brennan’. (https://www.roscommonstanley.me.uk/geography/ireland/celina-celenia-or-selina-stanley-connor-or-brennan/) You can probably tell that there is a ‘but’ coming. The drawback still lies with the DNA. We share no discernible amount of DNA. Furthermore, there is no match with the other researcher either. This means that there are not two but three distinct Stanley families in a very small area. It is fair to say that we are all extremely surprised by this discovery.
I must turn from Donald Rumsfeld to Richard III. 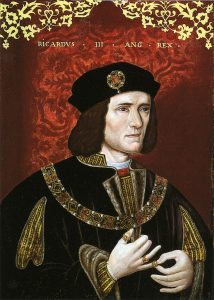 When a skeleton was discovered under a car park in Leicester in 2012, the remains were thought to be those of King Richard III (died 1485). There was strong circumstantial evidence for this deduction. Mitochondrial DNA (the part that goes through the mother’s line) proved the case, “beyond reasonable doubt”. When the analysis continued, all was not as it should have been. Royal lines are very well documented, meaning that there tend to be plenty of people to test. The Y chromosome passes from father to son. Somewhere along the line, there is a break, possibly more than one. Someone’s father wasn’t who he was supposed to be! I wonder if something similar happened in the tranquil countryside of Roscommon. And will we ever know?
https://commons.wikimedia.org/wiki/File:King_Richard_III.jpg