In ‘Wilfred Owen & Patrick Stanley’ I referred to the fact that Patrick’s guardian angel worked a long and very busy shift. I have been examining the records of the Commonwealth War Graves Commission (https://www.cwgc.org/ ) to see just how busy.

CWGC records the names of 14,811 men who died in the Great War whilst serving in the Manchester Regiment. It is so easy to write that sentence. It records a number. It represents 14,811 individual tragedies. To provide some context, neither of the stands behind the goals at Manchester United’s football ground could accommodate all 14,811.

The first one died on 24th August 1914. The last one died at the end of August 1921. The end August 1921 was taken as the cut off for administrative purposes as much as anything else. In practice, men continued to die early from the effects of the war for decades to come. I could make the case for Patrick being one of these. He spent some time coughing every morning when he woke up. This was attributed to the fact that he had been gassed.

I have been looking at the deaths that occurred whilst Patrick was in France/Belgium.

It is not possible to be precise. The date of death will not always equate to the date of being wounded. Some deaths that took place whilst he was present in the field would have been as a result of injuries incurred earlier. Equally some of his colleagues, wounded alongside him, would have died after he left.  When a large number of men are buried in the same cemetery then it is a safe assumption that all were killed in the same action.

The 2nd Battalion suffered 59 deaths in the 46 days that Patrick served in France in 1914. There were 60 deaths in the five days before he joined them. There is never a good time to join a battle. There are definitely bad times. His timing was good on this occasion.

In 1915, Patrick spent 94 days serving with the 1st Battalion. In that time, they lost 76 officers and men. I do not know why he was sent to the 1st Battalion and not back to the 2nd. It wasn’t the worst posting. By comparison, the 2nd Battalion lost 106 in the same period.

Because he insisted on being discharged, as per the terms of his 1904 enlistment, Patrick spent just over 500 days away from the conflict. It is impossible to know where he might have served during that period. One of the actions that he missed took place on 1st July 1916. It was the first day of the Battle of the Somme, and was the bloodiest day in the history of the British Army. Many battalions of the Manchester Regiment took part. They suffered over 700 deaths on that one day alone. 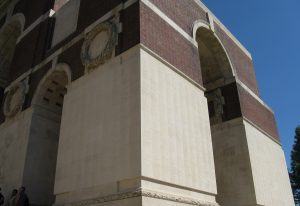 His last period at the front was the longest: a total of 570 days. As already covered in ‘Ancre’, the 2nd Battalion was reduced to 6 officers and 150 men within days of his arriving. This is a rare example of bad timing on his part. In the week after he arrived, they lost 63 people killed. Nearly 75% of these (47) are commemorated at Thiepval (pictured) as having no known grave. That is an indication of the severity of the fighting.

A few of the CWGC records do not mention the battalion. If I exclude these, then the 2nd Battalion lost 344 men during Patrick’s 570 days in France/Belgium. The total number of deaths incurred by his Battalion during his periods of service was 479. Full strength of a battalion was approximately 1,000. (And very few battalions were at full strength in the latter months of the War.) In simple terms, he had a 50% chance of living, and an equal chance of dying.

He had a far greater chance of being wounded, as indeed he was, on at least two occasions. Being wounded could well have saved his life. There are over 1200 names of men who served in the 2nd Battalion of the Manchester Regiment listed by the CWGC. Patrick was a lucky man.