In ‘Lessons in Geography’, I compared the entries in the Regimental War Diary in 1918 with the content of Lyn Macdonald’s book ‘To the Last Man’. Whilst the 2nd Battalion of the Manchester Regiment was present during the actions described, they are not explicitly mentioned. This is quite understandable. If an author attempts to namecheck every unit, the text is likely to become repetitive.

I have just read ‘Catastrophe’ by Max Hastings. He examines the events of 1914. He covers the events leading up to the declarations of war, and the first few weeks of the conflict. Chapter 6 is called ‘The British Fight’. It covers the fighting at Mons (23rd August) and Le Cateau (26th August). Once again, the Manchester Regiment is not mentioned. Their contribution always seems to be just out of the picture.

In August 1914, the British Expeditionary Force (BEF) consisted of 52 Infantry Battalions. The majority of them were engaged in the fighting in the vicinity of Le Cateau. The 2nd Manchesters were part of the 14th Brigade. They were located of the extreme right of the British line, and therefore at risk of being outflanked. Other Battalions in their Brigade (e.g. 1st East Surrey and 2nd Suffolk) are mentioned in the book as having suffered heavy casualties. The 2nd Kings Own Yorkshire Light Infantry (KOYLI), with whom the Manchesters had travelled from Ireland a few days earlier, were to their immediate left. They are also mentioned. They made a gallant effort to stem the German advance and paid the price. However, they did win time for other units to withdraw. The KOYLI and the Manchesters both had over 50 men killed on 26th August. 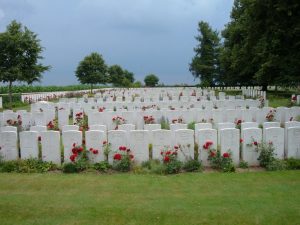 A few are buried in the Le Cateau Military Cemetery (pictured). The majority of the casualties are commemorated on the La Ferte-sous-Jouarre memorial (pictured on These Boots are made for Walking 2).

I would advise anyone seeking to understand the conflict to read as widely as possible. No single source can do justice to the events in their entirety. Documents, such as a Regimental War Diary, provide a lot of detail, but no real sense of the overall scope of the fighting. Reading books such as those by Lyn Macdonald and Max Hastings are good for context, but could easily leave the impression that the Manchester Regiment was not represented in the action. Personal recollections, where available, are particularly important especially to a family historian.