One of the characters in Alan Bennett’s play ‘The History Boys’ expresses the sentiment that history is just one thing after another. (I am not repeating the exact quote. It is easily accessible on line!) And, at one level, so it is. I have tried to convey in these blogs that history has a profound human dimension. The events in which my grandfather Patrick took part affected him. In some small way he affected the events. It is impossible to say whether any of his interventions were critical. As someone who started, and ended, his military career as Private Stanley, his scope for decisive action was limited. Having said that, Lord Nelson was killed by an ordinary French marine. Perhaps Patrick did fire a similarly significant round at some point.

Like many others, I have been critical of the slowness of the military leaders to learn lessons during the Great War. (see Private John Stanley) In order to form such a judgement, it is necessary to look beyond the simple facts of what happened. One has to examine why things happened. One has to delve into the personalities of the decision makers. One has to investigate the culture of the organisation, and of the times.

I have been reading a book that examines the Battle of Jutland in great detail. (The Rules of the Game, by Andrew Gordon). Jutland took place one month before the start of the Battle of the Somme. Both battles were seminal in their own way. The Admirals and the Generals involved were products of their time. We are all products of our time. The lives of leaders tend to be well documented. Their influences can be traced. This makes analysis possible in a way that is difficult for the ordinary soldier or seaman.

The senior figures in the Great War were Victorian and Edwardian in their upbringing and outlook. They came from a very narrow strata of society. If they felt that, as Englishmen, they were particularly blessed, then there are good reasons for this. The British Empire stretched across the world. In 1914, Britain produced more ships than the rest of the world put together. In the years 1909 -1912, Britain commissioned nineteen major warships (battleships and battlecruisers). The mould breaking HMS Dreadnought was built in 131 days. (Some prefabrication had taken place ahead of the official start date). The industrial capacity of Britain was staggering.

One phase in Andrew Gordon’s book particularly caught my eye. He refers to “the canker of a long peace” in a chapter entitled ‘The long calm lee of Trafalgar’.  As quoted, the phrase first appears in The Times (of London) newspaper during the Crimean War (1853- 1856). Intentionally or not, it seems to be a misquote from Shakespeare. “the cankers of a calm world and a long peace” features in Henry IV Part I. (It is part of a 133 word sentence so will not be quoted in full!) No one wants there to be a regular series of wars. But long periods of peace tend to erode fighting capability. The skills required to shine in a peacetime army or navy aren’t necessarily those required to prosecute a war.

The average person in England/France/Germany/Russia was convinced that their nation had the wherewithal to win the war. When self-confidence is combined with overwhelming material superiority, then the absence of doubt about the outcome is understandable. Such attitudes are not the most fertile ground in which to explore, evaluate and assimilate new ideas. Attempting to maintain the old order is attractive when you are at the top of the tree. 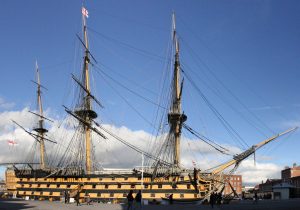 But things change. Military leaders have to fight the current battle, not the last one. At Trafalgar, Nelson’s flagship (pictured) was 40 years old. He knew the capabilities of his ships in great detail. His fleet was well drilled and battle hardened. Most of the action took place at very close range, with ships frequently becoming entangled with the opponents. It was almost impossible to miss when firing the main armament. Rate of fire becomes critical. Despite this, only one ship (Achille) was destroyed during the battle. (Many sank in the storm that followed.) Conversely, only one major ship of the 60 involved suffered no casualties. (HMS Prince sailed so slowly that the battle was largely over by the time it arrived.) Furthermore, Nelson made no tactical changes once the battle had started. 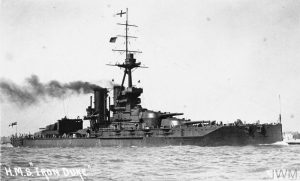 The contrast with 1916 is marked. At Jutland, Admiral Jellicoe’s the flagship (HMS Iron Duke, pictured) had been in commission for two years. The oldest of his battleships had been in commission for seven years. It was a very young fleet. Few of the crews had seen shots fired in anger. The means of controlling large fleets travelling at speeds beyond Nelson’s comprehension (20-25 knots) were unproven. Jellicoe was trying to adapt to a confused and ever-changing tactical situation, and then communicate his intentions to a widely dispersed fleet. The ranges at which ships engaged (over 10 miles) were also more than an order of magnitude different. Accuracy becomes important. One shot that hits the intended target is worth any number that miss. Only 38 of the 151 Royal Navy ships suffered any casualties. And yet 25 ships were sunk out of 250 taking part (14 British and 11 German).

In such circumstances, the challenges of command are quite different from those faced by earlier generations. Being imbued by the spirit of Nelson or Wellington is all very well. Undoubtedly there are many lessons to be drawn from studying the campaigns of Alexander the Great, Hannibal or Charlemagne. But they don’t provide much insight into the best way of fighting a battle in the early 20th century.

The British Army had learned some painful lessons in the Boer War (ended May 1902). At least their soldiers were dressed in khaki. Many French soldiers still had blue coats and red trousers in 1914. Fighting a lightly armed force of irregulars in South Africa was poor preparation for the Great War. Into this changing world, ordinary men such as Patrick were thrown. He had (probably) experienced isolated rifle fire from tribesmen whilst in India (1906-1910). He would not have faced machine guns operated by a highly trained modern army. He would not have encountered prolonged artillery barrages. He would not have experienced of a gas attack, or spent days knee deep in muddy trenches.

A lot of men would die whilst lessons were learnt, at every level of command. In one sense, Patrick was lucky: he was only wounded. There was one constant among so many changes: as a private soldier, he was still expected to follow orders.