Mary Cannan first appeared as a visitor in ‘Room at the Inn’. A subsequent blog (Mary Cannan) explored her story in more detail. At the time there were gaps in the story: she seems to disappear. I have investigated in more detail and now have a reasonably complete story. The key was looking for sufficiently wide variations on the name.

Mary married John Cannan in Q2 1849 in Dewsbury. On the 1851 census they are living at 486 Middle Road, in the Daw Green area of Dewsbury. Not so much Daw Green as Irish Green, as it was (and still is to some extent) home to many people with Irish roots. The surname is shown as Cannon. John is listed as the Head. By this time, they have a seven month old son called Lawrence. I have no information about the size of the dwelling. I suspect that it was extremely crowded. Listed at the same address are no fewer than ten other residents, aged between 54 and 10. Lawrence is the only one of the thirteen not born in Ireland.

One of the lodgers was a lady called Bridget Farrell, born around 1829. The name Farrell appears in the blog ‘Irish Petty Sessions’. Catherine Farrell was one of the witnesses to the marriage of Patrick’s sister Mary to Patrick Malone in Roscommon in 1887. It is possible that there is a connection. (It is, I have to admit, a remote possibility!)

In 1861, John, Mary and their six children are at 624 Back High Street. The enumerator has recorded their name as Connon. It has been transcribed as Cannon.

If the census returns were purely for the benefit of family historians, life would be a lot easier. However, there are often tally marks that make it difficult to read some of the data. In 1871, John, age 40 appears to have a 41 year old son. Have studied the original sheet, I am sure that the true age of the son was 16. Lawrence is said to be 30, whereas 20 is nearer the truth. There is also a daughter born in 1862. Her name is illegible. It does look like James, but is probably Jane, or Janie. 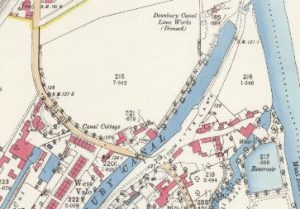 I finally found John, Mary and daughter Jane on the 1891 census. They are recorded as Canning. Their residence is at 32 Water Lane. It probably took its name from the fact that it ran alongside the canal heading towards the river. There were very few dwellings in the area. The street still (just about) exists. It is now described as ‘non-residential’. The canal has been filled in, but it is still evident from the street view.  The most interesting fact is that both John and Mary are shown as having been born in Roscommon. This means that when Mary was staying with Uriah Senior and his wife Catherine (born Stanley) ten years later, it wasn’t just an Irish connection, but a Roscommon connection.

At one level, I am pleased to have tied up some loose ends. Major uncertainties still exist. Part of the problem is rooted in low levels of literacy. If you can’t read, you won’t know how your name is supposed to be spelt. You will only know how it sounds. You won’t know if an official (e.g. Registrar, Census Enumerator) mishears what you say. Many names mutate (a bit like viruses!) over time. The Cannan/Cannon/Canning (& possibly Gannon) story is a case in point. The challenge for the family historian is to make sense of the twists and turns and find hard evidence.