In April 2019 I posted a blog on my family history website entitled “DNA: the magic bullet?”. (https://www.roscommonstanley.me.uk/direct-line/dna-the-magic-bullet/ ) In the intervening period, the number of DNA matches that appear on my list from Ancestry has expanded. In the 4th-6th cousin group (above 20 cM of DNA in common) there are 294 names. I refer to this group as the ‘inner circle’. More distant relations (in the 6-20 cM range) now number over 30,000. (These form the ‘outer circle’.) At one level this is good news. On a more practical level, it presents a massive data processing problem.
In 1620, just over 100 passengers travelled to America on the Mayflower. It is estimated that over 10 million Americans can trace their ancestry back to one of those hardy souls. Worldwide, the number is over 30 million. I understand the motivation to trace your line back to see if you are descended from these early settlers. In a similar fashion, many Australians take delight in finding a link to the first (European) arrivals in their country in 1788. In their case, these people were convicts not religious dissenters. (There were 775 convicts and 645 others on the 11 ships that became known as the First Fleet.) My wife has an ancestor who was sent to Australia in the 1830s for stealing cotton. This is hardly the action of a hardened criminal who was a threat to the wellbeing of decent members of society. It is, however, an interesting discovery. It certainly beats the huge number of agricultural labourers that feature so regularly in my records.
In both cases, (the American and the Australian) researchers have a fixed point on which to focus. They have motivation. Crucially, there are quite a lot of records to explore. Furthermore, there are a lot of researchers. The situation is very different for those of us delving into mists of Irish antiquity. A common ancestor may be four, or five, or six generations back. We won’t know until we find him or her. Many records no longer exist. Furthermore, a lot of people who have taken a DNA test are not really interested in pursuing the subject in any depth. It seems that many people are content to know that they are, for example, 28% Irish (as I am, at least according to Ancestry). If the results show a small element of Viking or African, then curiosity may be stimulated. Many people that I have attempted to contact have not responded.
This situation seems to be analogous to the problem faced by code breakers. They look for patterns in huge amounts of material in order to make sense of otherwise random pieces of information. The Enigma coding machine used in the Second World War had some 150 million, million, million different combinations. It was still decoded. Alan Turing’s pioneering work on computing was only partially responsible for this achievement. The code breakers started with the known, and moved to the unknown. They referred to these clues as ‘cribs’. As an example, a very short, routine message might say, “Nothing to report”. If a message of that length appears regularly, then the codebreakers would have something with which to start. It might be completely wrong, but it was better than nothing. 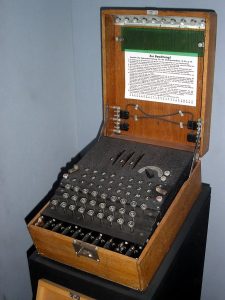 Please do not worry. I am not intending to give a crash course in code breaking. More in Part 2!