DNA evidence suggests that I am not related to the Ballyglass Lower branch of the Stanley family. (James Stanley and Oliver Stanley are shown as living almost next door to each other on the Griffiths valuation records.) When I published the blog “Ballyglass Stanley”, https://www.roscommonstanley.me.uk/possible-relations/ballyglass-stanley/, I was contacted by another researcher. He was able to supply additional information. He is descended from the James Stanley who lived in Ballyglass Lower. We have already compared DNA profiles and found no match. James’s son John married Mary Graham (shown as Grehan in the church records) on 14th January 1882. He was 26. She was 19. They emigrated shortly after the marriage. Their first child, James, was born in America in November 1882. It is always good to be able to fill in some details on what happens to people.
The Griffiths land census records the presence of another Stanley in the immediate vicinity. Thomas Stanly is the tenant of a small plot (No 8 – one acre) in Clooneenbaun. It was about ½ mile (800 metres) from James and Oliver. (Their houses were in the extreme top left of the map) The John Stanley that I believe to be my great grandfather died in Clooneenbaun in 1898. 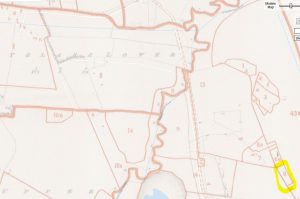 Plot 8 is east of Lough Creavy. The dotted line shown is now a modern road.
This raises a very obvious question. Was Thomas connected to my line, or to the James & Oliver line?

Thomas died in 1887. His age was given as 80. This means that he was born around 1807. (Age at death was often rounded to the nearest 5 years.) The death was reported by Edward Naughton. He had the almost adjacent plot (No 7). The 1901 census records the presence of an Edward Naughtin in Clooneenbaun. He is 80, and living with his daughter Catherine and her husband Thomas Mullin. Their record is House 13.
Thomas and Catherine married in January 1893, in Ballinaheglish Church. 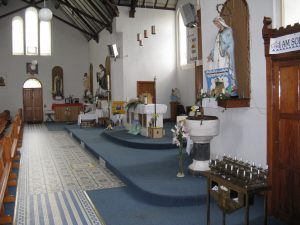 Quite by chance I took a photo of the interior during my visit in 2013.

I looked at the marriage record to see if there were any clues linking Naughtins to the Stanleys. None that I can see!