This blog explores the opposite problem to the previous one (Multiple clans). https://www.roscommonstanley.me.uk/geography/ireland/multiple-clans/
Ancestry has identified someone with whom I share 95 centimorgans (cM) of DNA. (Other testing companies are available!) This is by far the highest score that I have on my list. The next highest is 51. According to the wonders of the internet, the relationship between us is likely to be one of the following, ranked by probability:
• 35.13% Half 2C 2C1R Half 1C2R 1C3R
• 30.15% 3C Half 2C1R 2C2R Half 1C3R
• 22.22% Half 3C 3C1R Half 2C2R 2C3R
At the second cousin level we share great grandparents. At the third cousin level we share great, great grandparents. (2C = second cousin, 2C1R = second cousin once removed, half 2C = share one great grandparent but not the other one)
My grandparents (first cousin connection) were typically born in the 1880s. (Alfred Willis 1883, Lilly Page 1892, Patrick Stanley 1883, Edith Delves 1888)
My great grandparents (which would provide a second cousin connection) were born in the 1820s- 1860s. (Fathers can be older than mothers, often by 10-15 years.)
• Michael Willis, born 1847, married Ann Judge, born 1844
• William Page, born 1865, married Matilda Boniface, born 1867
• Thomas Delves, born 1849, married Charity Highlands, born 1855
• John Stanley, born 1823-25, married firstly an unknown woman in the late 1840s or early 1850s (hence her date of birth will be broadly similar to his), secondly married Bridget Ormsby, born 1840. Possible third marriage to Bridget Scott (named on Patrick’s 1883 birth record)
The dates of birth of my definitively identified great, great grandparents (which would provide a third cousin connection) are as follows:
• 1803, 1809, 1814, 1819, 1830, 1834, 1836, 1840, 1813, 1815, 1821 and 1821
Links back to relevant ancestors (in terms of meeting the 95 centimorgan criteria) born in the late 1780s and 1790s cannot be ruled out. We can be reasonably sure that the common ancestor won’t be any further back than that.
The really exciting thing for me is that this person and I share the same surname. Jackpot? It would be easy to assume that the link lies on the Stanley side. Before going too far, this assumption needs to be tested. Implausible coincidences have been known to happen. I was sent off in the wrong direction right at the beginning of my search when the wrong Patrick Stanley was identified.

Both of my grandmothers were Sussex girls through and through. Sussex records are excellent. I have traced their lines back three or four hundred years. (Sussex flag shown with the six martlets)

My maternal grandfather (Alfred Willis) was a Man of Kent (as opposed to being a Kentish Man – there is a difference). 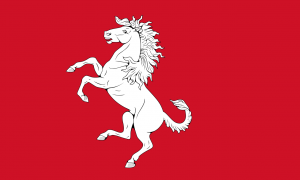 The records for Kent are also excellent. (Kent flag shown) I have traced this line back nearly 500 years in one case. No-one has moved very far. Three quarters of my family are rooted in the south east of England. Furthermore, they have been there for a very long time. The only branch of the family that falls outside of this tight geographic grouping is Patrick Stanley. He was born in Roscommon, Ireland.
The other person’s family tree, which is quite extensive, is heavily focussed on Yorkshire, and the north of England. The only significant outliers come from Ireland. There are no known links to the south east of England.
I am reasonably sure that the common ancestor has a connection with Ireland.
My great grandfather, John Stanley, was born 1823-25 (using data on marriage and death records). I don’t know where he was born. I know where he married, where his children were born, and where he died (Roscommon in all three cases). DNA has already ruled out connections to other Roscommon Stanley groups. E.g. the Ballyglass Stanley family and the Stanley/Kelly (married 1843 in Creggs RC church) family. The idea that he came from another county must therefore be entertained. This is what the other person believes. So, what are the next steps? We need to compare notes. We need to challenge each other’s deductions. It will be exciting to see what emerges. I will report in due course.