Patrick signed up for the army in Pontefract, Yorkshire. At the time (1902) he was living in Dewsbury. The two towns are 16 miles apart. A route planner will tell you to allow 39 minutes for the journey. This assumes that you have access to a modern vehicle. I don’t know what means of transport Patrick used. It is quite possible that he walked. It would have taken him about five hours. Once he had joined the army, they would have made arrangements for him to travel to Regimental Headquarters in Ashton-under-Lyne (Lancashire). In both cases I can be certain that he did not go by car. 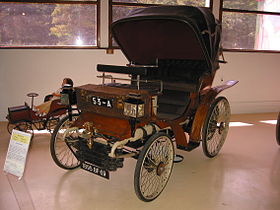 Produced between 1898 and 1901. Power was 10-12 horsepower. It seats two people. A total of 20 were made. The low power was not a major issue. In 1901, cars were limited to a top speed on English roads of 14 mph (22.5 kph). At that time, there were only a few thousand cars on the roads. They were generally seen as a play thing for the rich. A wealthy traveller would have allowed (at least) a full day for a trip from Pontefract to Ashton-under-Lyne. The journey would need to be completed in daylight. Car headlights provided very little illumination of the road ahead. Street lights outside of towns did not exist. 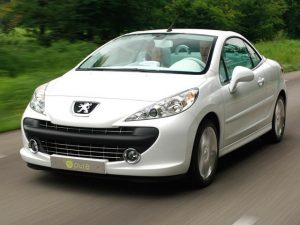 Recently my wife and I made a similar cross Pennine trip. We travelled in a five seat Peugeot 207. Power output was 90 horsepower. The car can easily exceed the national speed limit of 70 mph (113 kph). When production of the 207 ended, over 2½ million had been made. It does appear automobile engineering has made significant progress in the last 100 years!