The first thing to establish is that I am referring to County Roscommon in the middle of Ireland. There is another one in Michigan, USA. County Roscommon has an area of 1022 square miles. The population (2016) was 64,544. I live in Staffordshire in the middle of England. It has an area of 1047 square miles and a population of 1,126,000. The areas are almost identical. Staffordshire has 17 times the population. I think of Staffordshire as being relatively empty. By European standards it is. By the standards of Canada or Australia it probably appears crowded. There are a few sizeable towns and cities. Outside of these there is a lot of unspoilt countryside. Roscommon takes emptiness to a different level.

The pattern of population distribution is also noticeable. Counties in England with low densities tend to have large areas that are unsuitable for housing on any scale. For example: moorlands, uplands, forests. Roscommon is not like that. It consists, almost entirely, of rolling countryside. People could live almost anywhere. They just don’t!

It hasn’t always been that way. In 1841, over a quarter of a million people lived in Roscommon. The population dropped by over 30% in just ten years. It continued to fall for the next 150 years. By the time Patrick was born in 1883 it had halved. The low point was reached around 1991.

The main reason for the sharp initial drop was the potato famine. I will cover this topic in another blog shortly. Exact figures are hard to come by. The general consensus is that, across the country, 1 million people died. Another 2 million emigrated. This is from a population of 6.5 million. All parts of Ireland were affected, some worse than others. Roscommon was one of the worst affected counties. 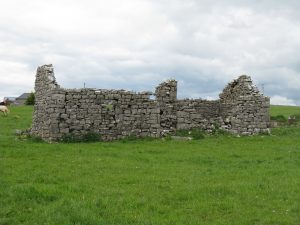 One of the consequences of rapid depopulation was a surplus of housing. Many dwellings were left to fall into ruin. An example is shown. It was not luxurious but at least the walls were solid. 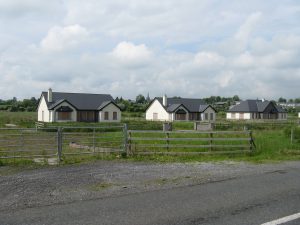 The global financial crisis hit Ireland quite badly. The housing market came to an abrupt halt. As a consequence, there are unoccupied houses from a quite different era around the county as this picture shows. These bungalows must have been built speculatively. They have never been occupied.