I am indebted to Karl Noble of Rotherham Council’s Museums Service for a chance comment that he made in an email. “Out of interest the 3rd Battalion were used only once as an independent unit overseas, from January to August 1902 they served in South Africa on garrison duty and protecting supply lines. They had all volunteered to take part in the Boer War, rather than just as casualty replacements for the 1st Battalion, so the whole Battalion was embodied.”

Having learnt that the militia were all home based, it now appears that there were exceptions to the rule.

I cannot help wondering about the phrase “all volunteered”. Did they? Or was pressure applied?

The 3rd Battalion left from Southampton on the Cunard ship Aurania. They saw active service, including the loss of their commanding officer Colonel JG Wilson who died of wounds in March 1902. 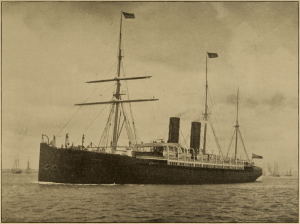 They would have returned around the time that Patrick joined the Battalion. No doubt their stories would have filled his head. Family folklore had it that Patrick served in South Africa. Evidence was always lacking. For a long time, I thought that he had assimilated so many stories that they became his own.