Units in the British Army have always had some wonderful names. E.g. 65th (2nd Yorkshire North Riding) Regiment of Foot. E.g. 84th (York & Lancaster) Regiment of Foot. In 1881, Hugh Childers, the Secretary of State for War, implemented a series of reforms for the infantry regiments. Each regiment was to have two regular battalions and two militia battalions. The leading numbers were dropped. The purpose of the militia was to keep a supply of trained men ready in the event of war and to replace losses. In practice, the reforms took a long time to become fully embedded. The two regiments listed above combined to became the 1st and 2nd Battalions of the York and Lancaster Regiment. In August 1902, Patrick joined militia. The officer countersigning his papers referred to himself as in charge of the 51st and 65th Regimental districts. The 51st Regiment of Foot had become part of the Kings Own Yorkshire Light Infantry (KOYLI) a mere 21 years earlier. They shared a depot with the York & Lancaster Regiment at Pontefract. 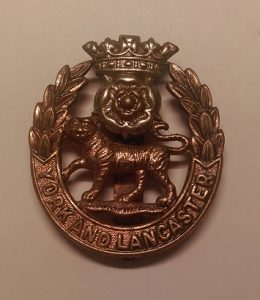 Patrick signed up for six years. He served for six weeks.