In “Both ends to the middle”, I referred to the two Americans with whom I share 32-34 cM of DNA. They are first cousins. Their shared Grandmother is Sue Alice McHugh. (I can exclude their shared Grandfather as his line has American roots going back over 300 years.)

Her obituary is full of useful information on her family. Sue was born on April 21, 1896 in Lincoln, Missouri. She died November 1986 at the age of 90. Her mother was Ella Price Foster (1861-1943). The obituary records her father’s name as John William McHugh (1856-1918). Family trees created by other relatives (and there are many such trees from which to choose) show his name as John Edward McHugh. John’s parents are Patrick McHugh (born 1825) and Catherine Kelly (born 1833). 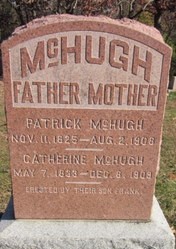 As previously reported, both were born in Ireland. Their gravestone in Bethany Cemetery, Foley, Lincoln County, Missouri provides exact dates of birth for both of them. (November 11, 1825 and May 7, 1833 respectively.) The parents of both Patrick and Catherine were probably born sometime around 1800. That is five generations back. The algorithm suggests that the Most Recent Common Ancestor (MRCA) is 4.2 generations back.

0.2 of a generation is a logical impossibility. The figure derives from averaging the full range of possible relationships. These include half siblings (one parent shared but not the other one) and cousins once (or twice) removed (comparing to the parents of a cousin).

My Grandfather, Patrick, was born in 1883. He was the youngest offspring of John Stanley, born 1823-25. (I have to refer to him in these terms to distinguish him from the multiplicity of other relations called John Stanley, including his father and also his eldest son, born 1866.) John was a contemporary of Patrick McHugh, but they are one generation apart if I count back from the present. If the MRCA is one of the parents of either Patrick McHugh or Catherine Kelly, then my relationship to the two Americans is that of fourth cousins once removed. The common ancestor is five generations back on their side and four on my side. That makes sense in genealogical and mathematical terms.

There are many other possibilities, but these two are the most likely in genetic terms. The link could be one more generation back. This introduces the possibility that a Kelly or a McHugh married a Stanley.

It may be a clue, and it may be a ‘red herring’, but John Stanley (born 1823-25) named a daughter from his first marriage Catherine. She was born around 1851-54. She became Kate (or Catherine) Senior. (See Kate Senior)