In order to access all possible records, it would be necessary to take out a lot of subscriptions to a great number of websites. The cost will exceed £500 per annum. I have switched providers more than once. All of the major providers are adding to their collections. If you have not looked at a particular site recently, then it is often worth checking to see what has changed. Find My Past has records from the Irish Petty Sessions 1828-1912. I accessed these in late 2016.

In a case listed on 30th September 1878, John Stanley, of Cloverhill Fuerty was the complainant. A man called Farrell (first name is illegible) was accused of assault on 28th September.

On 14th October 1878, Bridget Stanley was the complainant. The defendant was Cath Farrell. The charge was assault. The date of the offence was 28th September. The place was Cloverhill. Bridget did not attend any subsequent proceedings.

I am confident that John and Bridget are my relatives. The significance of the record is that it places both of them in Cloverhill midway between the birth of Thomas (1873) and Patrick (1883).

This sounds like a falling out between neighbours that was patched up quite quickly. It looks as if the men were fighting, and the women joined in. One wonders about the cause! There is significant evidence that they became friends again. In 1887, when Mary Stanley 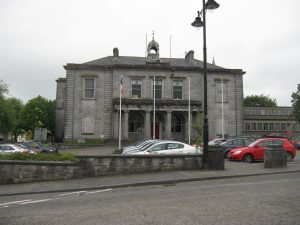 married Patrick Muldoon, one of the witnesses was Catherine Farrell. It is not possible to be sure that it is the same person, but the chances are high.