There are some surprising records online these days. You can look at dog licenses. A dog license had to be renewed every year. This provides some way of tracking people. The normal caveat applies: absence of information does not imply information about absence, merely that information may have disappeared.

Some court records have been published. Familiar names appear. Some examples are covered in other blogs. The electoral rolls are another source of information. The franchise was gradually extended. Even after an Act passed in 1884, estimates put the number of men over 21 on the register at little more than 50%.

When records from Ireland started to be published, it appeared that deaths were almost non-existent. That has been corrected subsequently. The Family Search website has three records of the death of a man called John Stanley in Roscommon that are of interest.

By far the best fit is the third one. The location, occupation and name of his wife are correct. As stated elsewhere, ages are notoriously variable. My great grandfather did not, as far as I am aware, have a son called William. Furthermore, he was not a coachman, he was a labourer.

There are two townlands called Islands: Islands Upper and Islands Lower. They are about three miles to the south west of Cloonenbane, straddling the railway line. Their proximity makes further investigation worthwhile.

I have no information 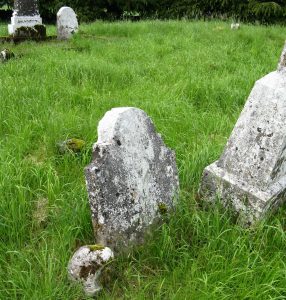 on his burial. Given the poverty of the family, it was probably in an unmarked grave. Even marked graves are difficult to decipher as the photo shows.