Patrick Stanley was born on 2 March 1883, in the Townland of Cams, in the Parish of Fuerty. The concept of Townlands is explained in the post ‘Irish Geography’. There are 2082 Townlands in Roscommon. In 1881, the population was 132,000. This means that there is an average population of 66 per Townland. In rural areas the figure was much lower.

A map of Fuerty can be found as follows:

At 1.28 square miles, Cams is above the average size for Townlands in Roscommon. All this means is that there is more emptiness! There is almost nothing there. I have looked at old maps. The Griffiths valuation (which records all land ownership and tenancy across Ireland) was completed in Roscommon in 1858. There were 10 tenants living in Cams at that time. Only four dwellings were those of labourers. This point is significant later on.

Patrick’s birth certificate gave me the evidence to focus the search on Roscommon. I commissioned research from the County Roscommon Heritage and Genealogy Company. Their report told me that Patrick was baptised on 11 March 1883 (source: Cloverhill RC Baptisms). The baptismal sponsors were James Mullooly and Elizabeth McDermott. 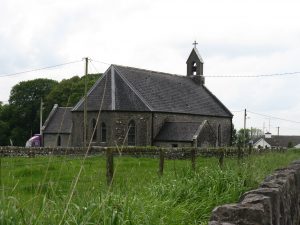 They looked for a record of a marriage between John Stanley and Bridget Scott. None was found. One step forward and one step back!

My researcher looked for others with the Stanley name in the local area. Only one family lived in Cams. This family will be the subject of the next post.