It is important to understand the concept of a townland. I am indebted to Roots Ireland for the following explanation:

The townland is the smallest territorial division of civil administration. Townlands can provide a traceable address to the present day for our ancestors. Dating from medieval times or earlier, townlands were used to identify a small area of land at a local level. These divisions were later used as the basis for plantation grants in the sixteenth and seventeenth centuries, and were considerably altered following subdivisions. The townland was used, not only for regular land transactions such as the imposition of rents, but also as the primary division in major land valuations, surveys and census such as the Tithe Applotment books and Griffith’s Valuation. Its significance now lies primarily in enabling the identification of small, localised rural areas. Parts of an individual townland may lie in different civil parishes and may also be, but not necessarily so, in different Roman Catholic parishes. The same townland names can be found in different parishes and counties.

Roscommon is divided into 2081 townlands. Some of these are very small, containing only a few houses. They are still used today. I asked how the postman knows who lives where in a particular townland. I was told that they just do!

There are 62 civil parishes. There are 33 Catholic parishes. The majority of these have been renamed at some point. Townlands, civil and church parishes do not always line up. This is apt to confuse people like me. Births are registered using the townland and the civil parish. Baptisms will refer to the church parish. 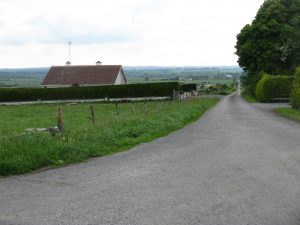 Patrick’s parents lived in the townland of Cams, in the parish of Fuerty. He was baptised in Cloverhill RC Church in the Catholic Parish of Cloverhill (formerly known as Oran).

Looking towards the Townland of Cams. Two houses can be seen on the left (one in the middle distance). Another one is hidden in the dip in the road. There is a house to the right hidden by the hedge. There are three house further down on the right. And that, in its entirety, is Cams in 2014: seven houses.

Old maps show that there were more dwellings 150 years ago. It is just possible to discern the locations of some of them on aerial views. Long dry summers are great for showing up the site of old buildings.