Some of the reasons for moving location were covered in ‘Why move’. Once someone had decided to move the next question is where to go. There may have been a few people who used the random “pin in a map” method. It was far more common to follow established paths. In the early 1900s, my grandfather Patrick Stanley went to Dewsbury in Yorkshire. This was home to his sister Mary (born 1868) and brother John (born 1866). On the 1891 census, John is staying with his half-sister Catherine (born 1851-54). Catherine was present in Dewsbury in 1881. Was she the first of the family to go there? The simple answer is, “no”. Her Uncle Thomas (born 1829) married Maria Mannion, in Dewsbury, in 1854. Maria is present in Dewsbury in 1851, but Thomas is not. The descendants of all of these families, apart from Patrick’s, remain in the area to this day.

The timing of Thomas Stanley’s departure from Roscommon lines up with the Great Famine. Everyone else followed his lead, sometimes many years later. This still leaves me with the question of why he chose Dewsbury.

The focus for these articles has been, and will always remain, the Roscommon side of my family. The topic under discussion does merit a small diversion to look at the experience of my maternal grandfather. In 1901, Alfred Willis was an ‘Oilman Hawker’ in the small village of Ospringe, near Faversham, about two miles from the north Kent coast. His roots in the area go back to the earliest parish records in the 1500s. Ten years later, he is a shop assistant in Brighton, on the south coast of Sussex, over 80 miles away. I can understand the change of occupation. Selling oil for lighting, door-to-door, was a market sector in decline as gas lighting became more popular. Why did he choose Brighton for his new home? As far as I am aware, he knew no one there. This remains one of my unanswered questions. Communications in the early 20th century were far better than they had been a hundred years earlier. The railways had transformed long distance travel. Newspapers multiplied due to tax changes and a rise in literacy levels. At one time Brighton had four newspapers (Herald, Gazette, Standard and Argus). Perhaps Alfred Willis read about opportunities elsewhere, or heard about them from a traveller.

It is now time to go back to Thomas Stanley. Why did he choose Dewsbury? The most plausible explanation is that he travelled from Ireland to England through Liverpool (see also ‘Redington and Stanley’). He found somewhere to live within the densely populated streets close to the docks. He would have been amongst many fellow expatriates. Someone working in the docks would have realised that a lot of incoming raw materials were heading for Yorkshire, and a lot of finished goods from Yorkshire were exported through the port of Liverpool. Word of mouth was probably enough for some of them to look for opportunities in the factories of Yorkshire. Then, where one went, others followed. 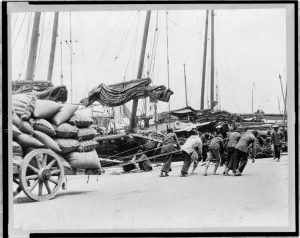 The picture shows dockers in Hong Kong. It does illustrate the sheer physicality of the work. Each sack on the cart would have been picked up and carried on the shoulders of one person.