Having discovered a locally born Stanley family with a strong geographical connection (New St) to my Irish ancestors, it was an obvious line of enquiry to follow.

The same family appears in 1891. John’s date of birth is now shown as 1855. Their address is Carlisle St. This is another address that does not seem to exist today. The extensive redevelopment that has taken place has changed the entire streetscape. I was expecting to find them in New Street, given that Thomas (1889) and Frank (1893) were born there. It is possible that Ellen went to New St in order to be cared for by a relative whilst giving birth.

John and Ellen were married in 1884. Ellen’s maiden name was Kenny. Coincidence? It is beginning to look like a pattern.

1881 finds him living with his mother Maria (as head of the household) who was born in 1829 in Ireland. It is hardly surprising than an Irish connection has reappeared. Maria is also head of the family in 1871. In 1861 the pair of them are staying with Patrick Mannion. Maria and Patrick and siblings.

At this point it was relatively straightforward to track down the marriage in Dewsbury, in 1854, of Thomas Stanley to Maria Mannion. 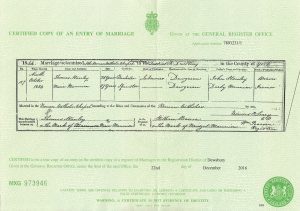 Thomas was 25 (born 1829). His father’s name was John, a weaver. Once again it is a case of find a name and stick to it. This particular John would have been born at the end of the eighteenth or early in the nineteenth century. There is no good match for Thomas or John on the 1851 census, or earlier. This the point where the lack of the census returns from Ireland is annoying. There is no direct evidence that he was Irish. It remains a good possibility. He did marry an Irish girl.

The best fit for a death of Thomas is in 1857 in Wortley, about 8 miles north of Dewsbury.